When photographing a rising full moon one needs to know two things: when will it come up and where will it come up.  The first question is easy enough; you can find moonrise data in most newspapers, usually in the weather section.  But the “where” question is a little tricky, especially if you want it in a specific location in the composition.  The reason is that the lunar cycle is about 18.6 years, so a perfect alignment such as the image below won’t happen again for a very long time.  This is particularly important when you wish to capture the moon right next to, or just above, a specific architectural element in an urban environment.  You don’t have a lot of time to get to the exact spot because the moon’s location changes quickly as the earth rotates.  So you need to be set up and ready to go before the moon appears.  Fortunately, this is much easier to do today than just a few years ago thanks to things like smart phone, tablets, and “apps” such as The Photographer’s Ephemeris.

Even with all of these advantages, one still has to deal with the fact of the moon’s apparent unpredictability and do a little advance planning.  So I thought it would be useful to go back in time to about 2001, when I started chasing moon shots.  While the tools have changed, the process is still pretty much the same.  Back then, one needed an 800-year old technology known as a compass and a source for astronomical tables such as the US Naval Observatory.  I used both to capture the image above, showing the moon next to the Lincoln Memorial just as it broke the horizon.  The photograph was made on March 9, 2001, so a few days before that I consulted the US Naval Observatory’s website and determined that the moon would rise at 6:16 PM, about 7 minutes after sunset.  The timing between sunset and moonrise is important because if the sun hasn’t already set, the moon will be washed out.  (A future post will go into that aspect in more detail.)

Further, the USNO site showed that the full moon would rise at a compass azimuth reading of 80.9 degrees.  We all know that the direction due east is exactly 90 degrees on a compass so the moon would be coming up a little bit to the “left” of due east. But something a little more precise would be needed because in this case, one could in a position where the moon was coming up behind the Lincoln Memorial and it would not be visible until it was too late.  An accurate compass can provide that precision as shown in the graphic below.  So on the day of the moonrise, I drove down the George Washington Parkway and parked in the lot for Theodore Roosevelt Island about 45 minutes before sunset.  From there it was a short hike down the Mount Vernon Trail to a point several hundred yards north of the Memorial Bridge.  I used the compass to find a location where it was exactly 81 degrees from where I was standing to the spot where I wanted the moon to be—just to the left of the Lincoln Memorial.   I set up my tripod and camera, attached the cable release and began to wait.  I was the only photographer there.

It is at this point where you have done everything you can to be in the right place at the right time.  The rest is basically luck and is the element that makes these moments so special…or not.   Will the sky be overcast?   Will a small cloud obscure the moon at the critical moment?  But on this night everything worked out well:  the twilight blue of the evening sky, the dark orange glow of the moon as a result of perfect atmospheric conditions, and a small pink cloud from the setting sun nicely positioned directly above the Lincoln Memorial.

Since then, I have attempted many more moon shots around the city, sometimes with success.  Here are a few more from the early years: 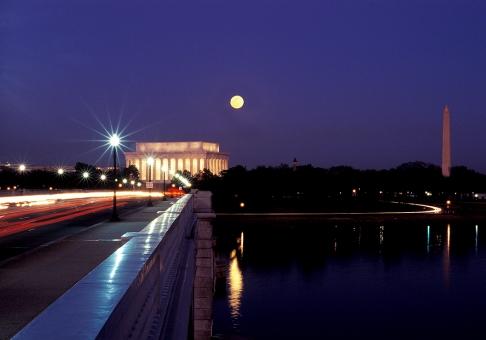 In this case, the moon came up on an azimuth of 62 degrees, much farther north than the March 9 2001. From the shooting location, it would have risen right behind the Lincoln Memorial so I had to wait for a while before it got to this point.

Again, this was taken well after the time the moon first broke the horizon, but I wanted to place it next to the dome.  This was taken two days before the full moon.  In all three of these shots, I was using a Nikon F-100 and shooting with Ektachrome 100 VS transparency film.

2 thoughts on “My First Moon Shot”