It was all too brief.  They were late to arrive, then came in with a rush, delighted us for just a few days, and now they are leaving.  For those of us who want to photograph them, it seems harder each year as more and more people descend upon this little landscape of pink trees framed by blue water and skies with constantly changing hues.

I guess it started on March 29th when the first hints appeared. An early morning fog blanketed the scene with an air of mystery, the almost invisible shade of pink suggestive of what might be in store.  The nearly deserted sidewalks suggested that only a privileged few knew of this place. For more than a week, the tease continued.  But by the morning of April 8th, the buds were beginning to open.  From a distance, the trees glowed with that distinctive pink while up close you could anticipate something better was yet to come.

But suddenly, the accelerator was pushed to the floor and in the next 24 hours, the blossoms swelled considerably.  Yet the number of people was still manageable.  There was no real problem finding a place to set up.  But warning bells of experience from past years were sounding in my brain. 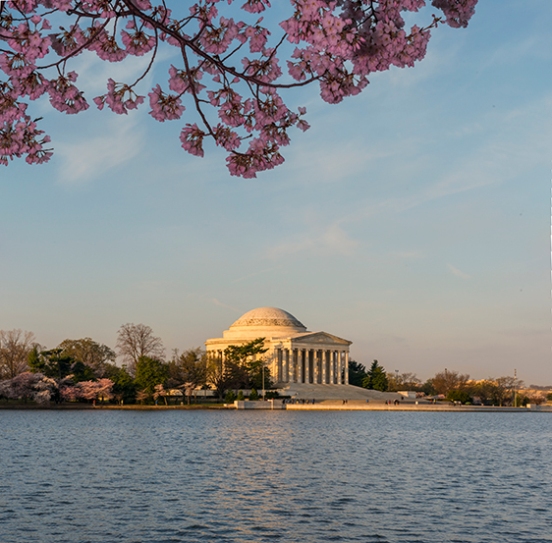 On Thursday April 10th, the floodgates opened and, as if on signal, a human tsunami rolled into the Tidal Basin.  For a brilliant description of the crowds from the perspective of a photographer, you can’t do better than the post by Mitch Zeissler. People wandering through the scene are a fact of life for DC photographers and adaptation is the only alternative to surrender.  One approach is combining patience with anticipation.  This image below is a merge of 4 separate shots, the first three taken from the extreme left to the middle right.  Then I waited until there was a brief moment when the sidewalk in the foreground was relatively clear and took the fourth image.

An obvious tactic is to incorporate the people in the image.  The tree below was a magnet for every camera phone that came by.  At any given moment some half dozen people would be somewhere in the foreground of this scene even though I was less than 10 feet from the tree.  The image here is actually a merge of 9 images shot of small sections of the tree that had no one in the picture.  But the portion immediately under the low branch arching over the sidewalk was always packed.  Then another photographer with a model appeared and the river of pedestrians kindly diverted around the tree to allow the fashion shoot to proceed undisturbed.   I grabbed the final shot with just the two of them in it.  Below it is what a photographic ethicist would call blatant cheating.  The two were removed digitally 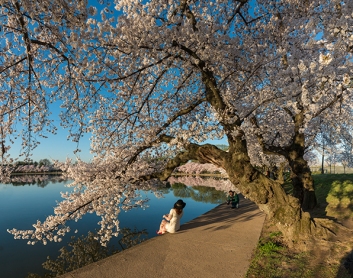 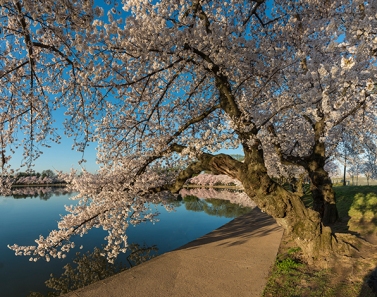 The next morning I arrived about 45 minutes before sunrise and managed to find a location that held some promise for an unobstructed composition.  The result is the image below.  This one is a merge of six images.  (Technical data: Nikon D800E with 24-70mm f/2.8 lens on tripod; Focal length 31mm, exposure 0.5 sec @f/16, EV set @ -1; flash unit off camera handheld with flash power reduced 3 stops and set at rear curtain sync.)

The next day was a Saturday, the weather was forecast to be perfect, and the Cherry Blossom parade was scheduled for later that morning.  It didn’t take a genius to know that the crowds would be far worse, but a friend and I bravely set forth to see what we could find.  As it happened, things worked out OK, and this is one image from that morning, taken at 6:25 AM. (Technical Data: Single image taken with Nikon D800E with 24-70mm f/2.8 lens on tripod; Focal length 70mm,exposure 1/5th sec @ f/16, no flash.) 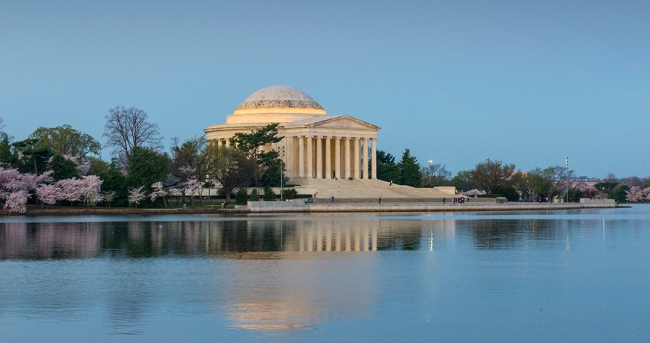 It was a beautiful day and about as perfect as it gets here so the long walk back to the car was quite special, if you don’t mind sharing the moment with 50,000 people.  But signs of the end were clearly visible.  The occasional small flecks of tiny pink petals floating down from the trees told the tale.  The blossoms had peaked and the downward decline had begun.  The cycle was moving onward and a year from now we’ll be back here again.  I can hardly wait.