The Cherry Blossoms are gone, the lunar eclipse was hidden by clouds this morning and it’s been raining all day.  So what better way to keep on the move than to make a scouting run into the city?  It’s that time of year when the fountains scattered around the Washington National Mall are being turned on.  Three weeks ago, only the World War II Memorial was operating.  But now many of them are running; of the nine that I checked, seven are happily pumping out the spray.

News Flash:   We interrupt this post to announce that one of my images was selected for “Monochrome Madness,” an event produced by Australian photographer Leanne Cole, a professional photographer in Melbourne whose blog has over 23,000 followers.  You can see her post with the 44 selected images here.  Now back to our regularly scheduled post on Washington, DC fountains. 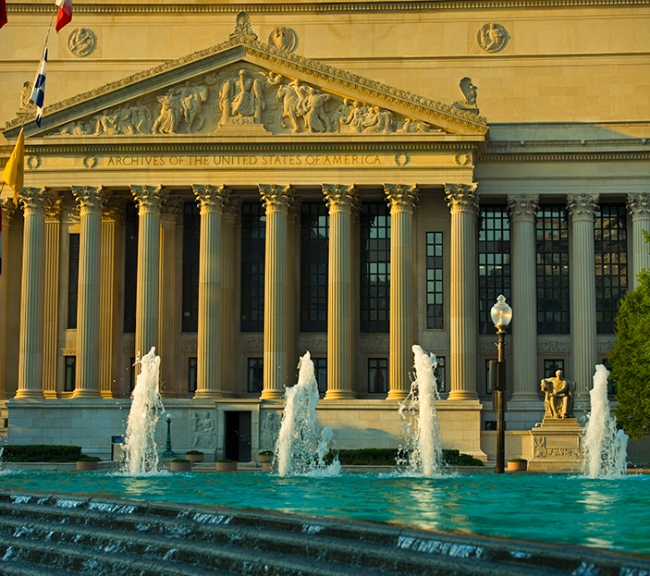 Navy Memorial (Pennsylvania Avenue between 8th and 9th Street NW):  This is one of the better fountains in the city, and can’t be easier to photograph.  You are steps away from a Metro entrance, benches are plentiful, and an excellent French boulangerie  (Paul Bakery)  is on the west side of the plaza.

Supreme Court   (1st Street NW, across from the Capitol Building): The two small fountains on the north and south sides of the front plaza are now running.  While not very impressive, any photo that includes the basins looks much better now than when they are empty.

Court of Neptune Fountain (1st Street SW, across from the Capitol Building): New York sculptor Roland Hinton Perry was only 27 years old when he completed the fountain in 1898, when the Jefferson Building of the Library of Congress was opened.  This is not your average fountain and the physicality of the scene is quite dramatic when the water is running.  The nearby Capitol South  Metro Station is a short walk of two blocks. 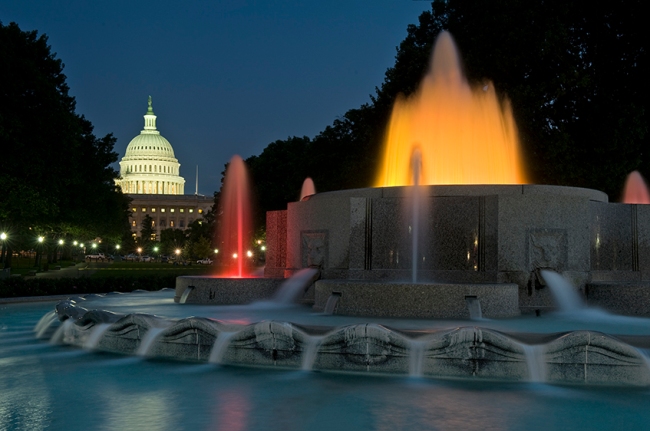 Senate Fountain  (opposite the intersection of Louisiana Avenue NW and North Capitol Street NW): This is one of the few (perhaps only) fountains in the city with a variable color lighting system).  Boasting a view of the Senate side of the US Capitol, it provides a number of photo opportunities in the evening light.  The Union Station Metro stop is within easy walking distance.

Japanese American Patriotism Memorial: (Directly opposite the Senate Fountain in a small triangular park between Louisiana Avenue, New Jersey Avenue, and D Street NW):  Technically this is not a fountain, but a flowing pool which is the principal feature of the park.  Dedicated only ten years ago, it recognizes the mistake made by the US in the forcible placement of more than 110,000 Japanese Americans into ten internment camps.

National Museum of the American Indian (Intersection of Maryland Avenue and Independence Avenue SW ):  The fountain is located on the northwest corner of the museum with the water cascading over large boulders and flowing along a channel on the north side of the building.  The Federal Center Metro Station is about 3 blocks to the south.

World War II Memorial   (17th Street between Constitution Avenue and Independence Avenue):  The fountains are now running although they are turned off sometime during the night and resume operating just before dawn.  However, the repair project at the west end of the Memorial is still unfinished.  As a result, the two waterfalls on either side of Freedom Wall are still dry.   Even so, this memorial offers more photo opportunities than any of the others on this list.  No nearby Metro Station.

Banneker Fountain (South end of the L’Enfant Plaza on 10th Street SW):  Probably the least well known site on this list, the 30-foot tall column of water (when operating) is the central feature of the Benjamin Banneker Park.  Banneker was an African American who had a role in the original surveys that eventually resulted in the layout of the city of Washington.  However, the historical evidence is unclear on the specific details.  The small park, designed by landscape architect Dan Kiley was constructed in 1967.  Kiley is currently being featured in a major retrospective of his work at the National Building Museum.  The L’Enfant Plaza Metro Station is about 5 blocks to the northeast.

I expect that both the Bartholdi and Banneker fountains will be running within a few weeks.  Stay tuned…