It won’t be long now.  My camera gear is ready to go, the research is done, and our travel documents have been checked and checked again.  But there is still time for another retrospective of previous visits.

Paris is often called the City of Light or “La Ville-Lumière.” The origin of this term has several competing theories, but we photographers know that the real reason is what happens after sunset.  The Parisians know how to illuminate their city.   According to Elaine Sciolino, in a 2006 New York Times article, considerable resources are dedicated to lighting the monuments, buildings, and bridges of Paris.  There is an entire lighting division in City Hall responsible for choosing the design, style, color, intensity, and timing of the lighting for  some 300 structures within the city’s 40 square miles.

The image above shows the Institut de France with the Pont des Arts, a pedestrian bridge, on the left.  The bridge links the Institut with the central court of the Louvre Museum.

Pont Neuf, a short walk away, is another example.  This was taken about five minutes earlier than the image of the Institut de France  This is the oldest bridge across the Seine today.  Construction started in the 16th century and it was the first bridge not lined with houses on both sides. 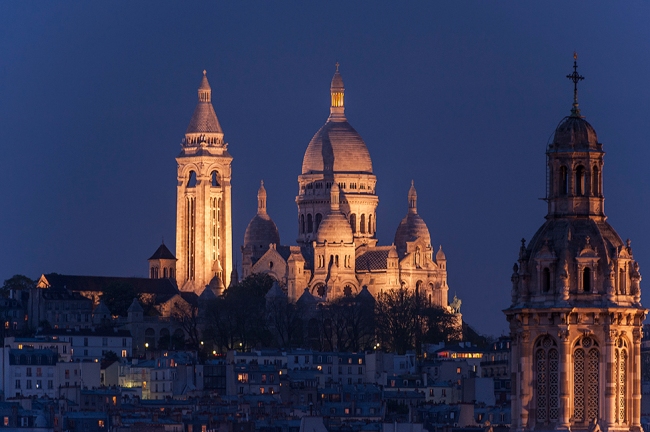 A few days later, I was on the rooftop terrace of Printemps (64 Blvd. Haussman),  and captured this scene of the Sacre-Coeur Basilica located on Montmarte Hill.

If all goes well, I should find a few more opportunities to photograph the La Nuit en Paris.   And, as in my previous post on Paris, I welcome any suggestions for subjects and/or locations. I’ve had several interesting suggestions already.  Just use the Comments option to send them.