The ABFriday Forum, launched by Stacy Fischer, of VisualVenturing,  is open to anyone who wants to illustrate the difference between two versions of an image, one being the final result and the second being the original or starting point.  The idea is to exchange ideas about a photographer’s conceptual vision and how she or he made it happen.   The “After” image in my submission this week is shown below. 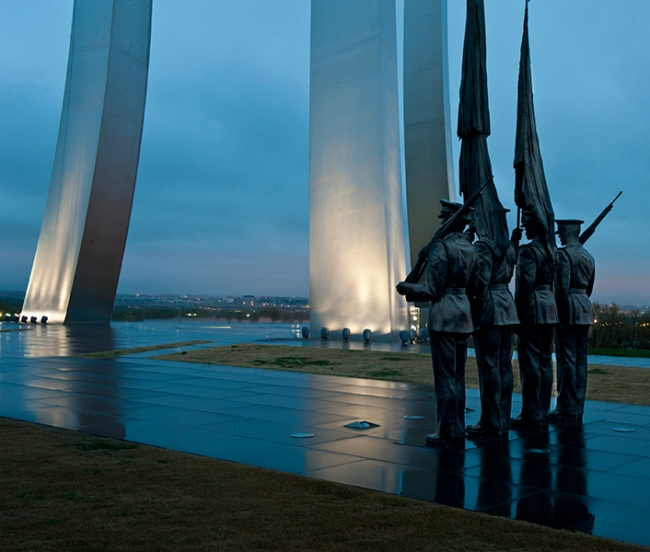 This image of the US Air Force Memorial was taken just before in a light rain in April 2011.  Although there was a heavy cloud cover, the sky was much brighter than the statues in the foreground. I adjusted the exposure for the sky, knowing that I could bring out the needed detail in the statues of the soldiers during post-processing.  (Technical Data: Nikon D700 with 24-70 mm f/2.8 lens; exposed 1.6 sec. @ f/16, ISO 400)  The image resulting from that exposure is shown below

All of the changes were made in Adobe Photoshop CS6.  When I made the original image my plan was to include the Washington Monument in the composition.  But when I brought it up on the monitor, the Monument’s small size seemed to make it a distraction more than a helpful component.  I decided to direct the viewer’s eyes to the two most important subjects: the four statues in the foreground and the base of the Memorial spires just beyond.

Once the crop was made, there was a little bit of clean-up involved.  It’s hard to see in this size, but the sensor of the D700 was in need of a cleaning and there were also a few small drops on the skylight filter.  I used a combination of the Clone Tool and the Healing Brush to remove these artifacts. 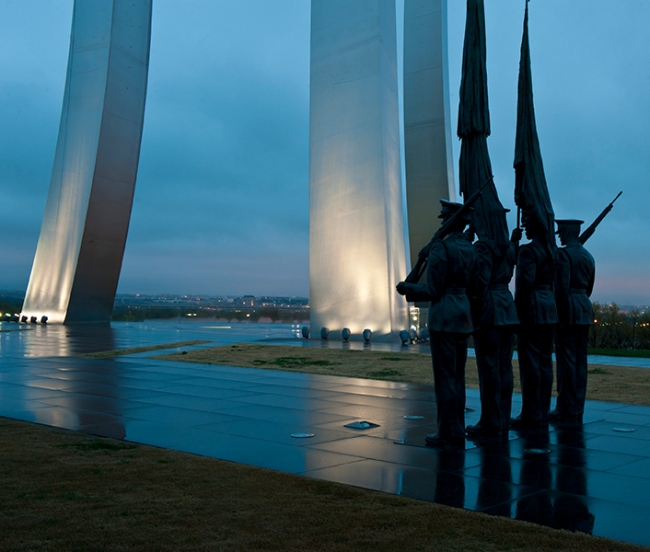 The last step lightened the statues of the four soldiers.  I used a selection tool to isolate them from the rest of the image and applied another Curves adjustment layer (blend mode: luminosity) to reveal detail in the statues.

One of the questions asked by a reader last week was how long it took to make these changes. In this case, I would estimate I spent 30-45 minutes, with most of the time involving the clean-up activity.

Thanks again to Stacy Fischer for organizing this effort.  Please check out her post and the submissions from other photographers.