Weekend nights are pretty lively in this city. Even before the sun has set, the party spirit is gearing up. The banks of the Seine are lined with thousands of young people assembled in small groups sharing food and various liquid refreshments and generally having a great time. The expansive lawns of the Champs des Mars and Esplanade des Invalides are similarly packed, but populated mostly by families and Frisbee tosseurs (not a real word). The streets are filled with tourists, stopping every 20 meters or so to photograph the city’s icons and the now obligatory “selfies.” And this photographer heads to the Pont Alexandre III, considered the most elegant bridge in Paris. 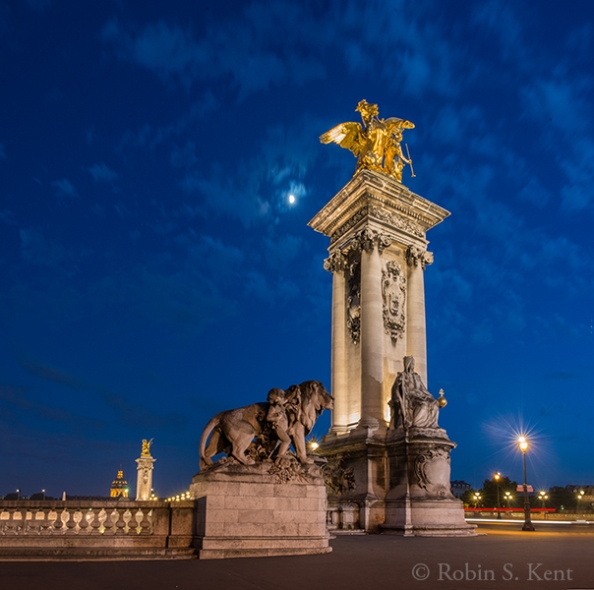 This was photographed from the Right Bank at the entrance to Pont Alexandre.  The entrances on both sides are flanked by a pair of pillars such as the one shown here, each with a sculpture of Pegasus, the mythological flying horse.  It was shot at about 10:40 PM.

This was also photographed from the Right Bank, about 25 feet to the left of the previous image.   In the bottom left, you can see the groups of young people celebrating the evening.  In the distance, the illuminated dome of Les Invalides sits astride the massive Esplanade des Invalides.  The two pillars on the left bank flank the entrance on the opposite side. Photographed at about 10:50 PM. 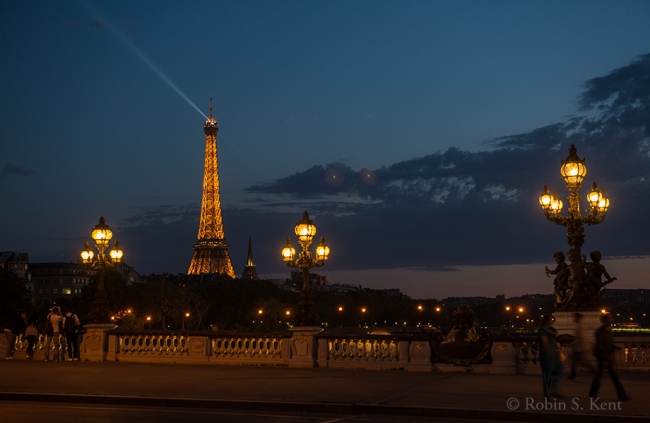 And, of course, the obligatory image of the Eiffel Tower.  Photographed at about 10:25 PM.  As you can see, I am steadily working my way downriver.

My travels about this city have been facilitated by the incredibly useful (and free) app by the Paris Metro system.  It knows where I am and I just tell it where I want to go.  It directs me to the right bus stop and tells me which bus to take and where to get off.  So I knew when I was taking that last shot at 10:50 PM that I could get across the bridge to the bus stop on the other side and catch the 11:00 PM 63 bus that would drop me off abut a block from our home base.  If you are coming here and don’t already have it, you must get a copy.  Just go to the App store and ask for the RATP app.