Apologies for the temporary lapse in Paris imagery. But although I wasn’t writing, I was taking pictures.  Now the journey is over and there is ample time to look at some of the highlights.

The Eiffel Tower dominates the Paris skyline and sooner or later one must brave the crowds of tourists and view the city from above.  The forecast called for scattered thunderstorms and it seemed that maybe I could get lucky.  Interesting clouds on the horizon, cowardly tourists choose other options.  But there were a lot of brave tourists that night and it was about an hour before we made it to the elevator and began the ascent. 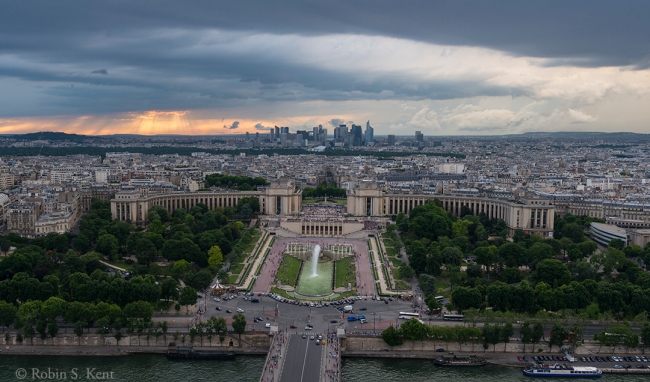 We arrived on the second level, about 380 feet above the street about an hour before twilight and there were some dark clouds on the horizon.  The scene looked promising. But then I saw the fountains of Trocadero were running at full power and to say that I was upset is putting it mildly.  I have been trying to capture those fountains up close for years and they are never running when I show up.  As the image above shows, the central cannons shoot a massive stream of water a distance of more than 150 feet.  But here I was, about a half mile away and almost 400 feet above them.  Five minutes later, the fountains shut down.

However, one must accept what one is given and perhaps there would be something else in store for that evening. As it turned out, good things did happen.  As the image below shows, the predicted thunderstorms appeared but in the distance. So we were treated to a lightning and thunderstorm display while remaining completely dry.  I don’t have one of those devices that senses lightning, but I did take one shot just as a bolt flashed in the distance. 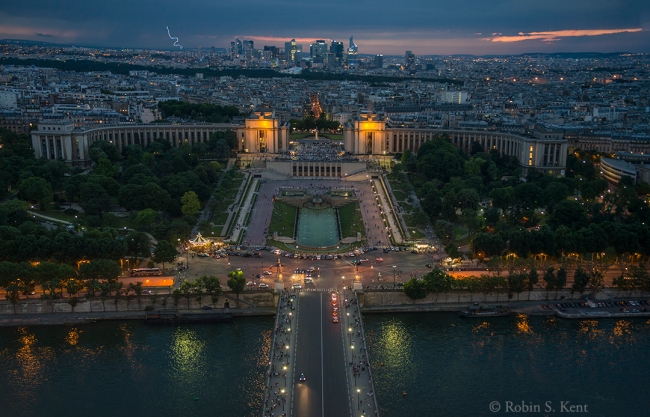 The skyscrapers in the distance intrigued me.  I was told it was the area known as “La Defense” and I thought that it might be an interesting place to explore.  Stay tuned…….

14 thoughts on “Paris: View from the Eiffel Tower”