The AfterBefore Friday, launched and managed by Stacy Fischer of Visual Venturing gives readers an opportunity to exchange ideas about various post-processing techniques.  My submission for this week could be interpreted as a rescue attempt for a grossly underexposed image or an example of exposing for the highlights and processing for the shadows.

This image was taken last month at Les Invalides in Paris, best known as the burial site for many of France’s military heroes, including Napolean Bonaparte. It also houses the Musée de l’Armée and two other museums dealing with military topics.  None of that is shown in this image.  The throngs surrounding Napolean’s tomb and the spectacular altar behind it limited my photographic opportunities.

But off to the side, an unoccupied antechamber caught my interest.  The light coming through the blue stained glass window  was significantly brighter than anything else in the scene so getting a decent result would require some post-processing.  I remembered the ABFriday Forum and thought this could be a possible submission.   The “Before” image (shown just below) came out quite dark as expected, because the image was deliberately “underexposed” by 2 and 1/3 stops. (Nikon D800E with 24-70mm f/2.8 lens extended to 38mm; Exposure: 1/100th sec. @ f/5, ISO 400, EV =  -2.33)

RAW Image with no changes

Whether or not you like the final result, I would venture that this exercise does make a good case for the advantages of shooting in RAW.  After downloading, I made a number of changes in the Adobe Camera Raw (ACR) converter. The adjustments were made in the following sequence:

Highlights reduced to -16 (to tone down the highlights in the window);

Shadows increased to +60 (to open up the deep shadows);

Clarity increased to +31 (about usual for me)

Vibrance increased to +51 (more than normal for me, but needed to bring up a golden tone in the dark stone walls surrounding the portal);

Saturation increased to +47 (I rarely use this slider but did so here for the same reason as the boost in Vibrance);

Overall exposure increased to +0.65 (this was done here rather than as a first step, because I felt I would have a more precise idea of what was needed);

Finally, I used an adjustment brush for exposure (set at -0.55) to eliminate the effect of the previous step on just the window. The result at this point is shown below. 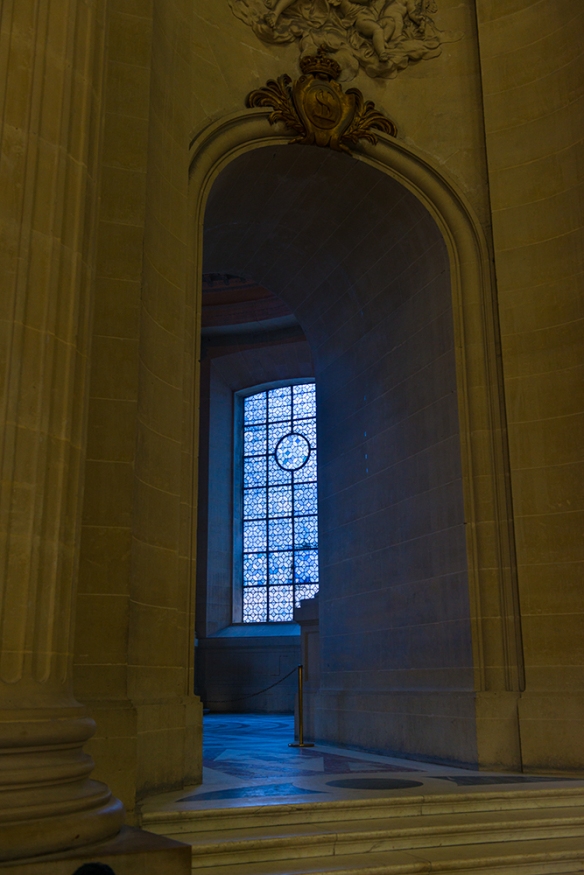 The next phase involved Photoshop CC.  First, I used the Edit > Transform>Distort tool to eliminate some of the parallax effect.  It is not entirely gone, but no longer is very noticeable. Second, I selected the exterior section of arched wall surrounding the portal and lightened it with a layer adjustment (Curves, blend mode=luminosity).  Third, the floral design above the arch was selected and brightened with another layer adjustment (Curves, blend mode=normal).  Finally the edit->fill (content-aware) tool and the clone tool were used to remove the small black object in the lower left and also the rope and stand inside the antechamber.  The reason for removing the latter was to make the entrance seem more inviting.  The final result is shown below.