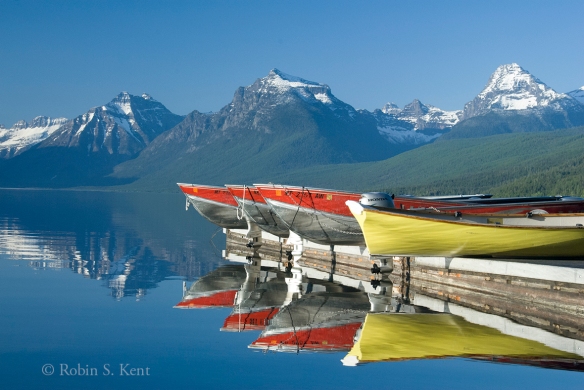 This week’s submission to Stacy Fischer’s After-Before Friday Forum was taken several years ago at Lake McDonald in Glacier National Park.  I arrived at the shoreline in the late afternoon hoping for a nice sunset image.  As the sun dropped toward the horizon, the low angular light was having an increasingly dramatic effect on some boats stacked on top of a dock.   (Technical Data: Nikon D200 with 18-200mm f/3.5-5.6 lens  extended to 56mm; Exposure 1/80th @ f/18, ISO 640)  As expected, the RAW file that resulted  (shown above) did not convey the intense colors I had seen. But the information was there and using Adobe Camera RAW (ACR) the adjustments made were as follows:

Image after Changes in ACR

The adjusted image (shown just above) was then moved to Photoshop for the final steps. These are shown in the sequence of the three images below. All changes were made with adjustment layers. 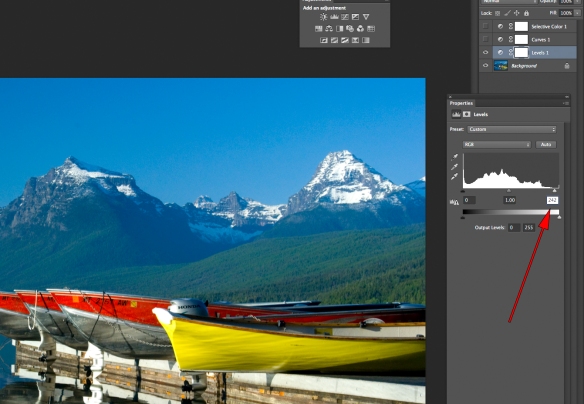 As a first step, the levels setting of 255 was decreased to 242 to darken the overall image just a bit (see red arrow in image above).

Next, some additional contrast was added to the overall image which helped emphasize the color of the boats (see red arrow in image above). 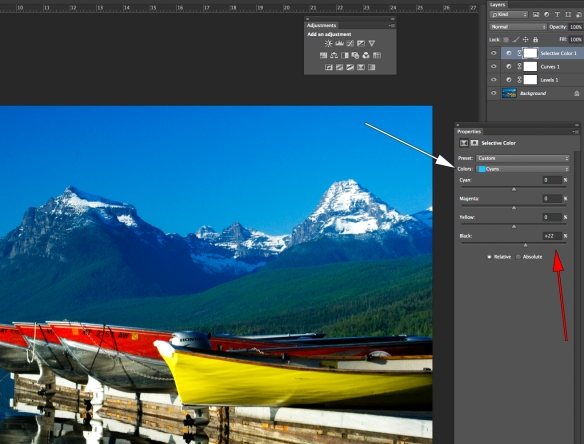 Finally a Selective Color adjustment layer was used to bring more life to the blue sky and the lake.  The color Cyan was chosen from the drop-down menu (white arrow) on the Colors bar and the Black value was increased to 22% (red arrow).

The final result is shown above.  About ten minutes after this photograph was taken, the sun dipped behind a ridge,casting this dock into shadow.   Thanks again to Stacy Fischer for managing 13 straight weeks of the After-Before Forum.  Please visit her post at Visual Venturing to check out the examples by other contributors.