Last night featured an attempt to produce a star trails image, a long time exposure that tracks the movement of the stars in the sky. The members of the workshop group assembled in various locations along the shore of Lake Mono and waited for nightfall. There are two basic ways to create such an image. The traditional procedure is to leave the shutter open for a long time, say about 90 minutes) and take just one image. A second method is to take a series of shorter images, say about 4 minutes long, and combine them in Photoshop to produce a single image that seems to have an unbroken set of star trails. The benefit of this latter approach is that it produces images with less noise or digital artifacts. More on this in a future post, but I decided on the multiple image approach.

When shooting a star trails sequence, one has to decide where to point the camera. If it is pointed directly at the North Star, the trails of the other stars will appear as concentric rings around the center point. If you point somewhat away from the North Star, the effect is different, depending on the direction of the camera. Last night, I chose a northeasterly direction. The rocks in the water were illuminated during one of the exposures and some unintended ambient light caused the dim illumination of the foreground rocks during another exposure.

A fair amount of minor adjustment work (removing jet trails, etc.,) is necessary after the images are downloaded, but those actions have been postponed until I get home to a better display monitor than I have with me here. What is shown below is the preliminary result, which provides a pretty close idea of what the final image will look like. 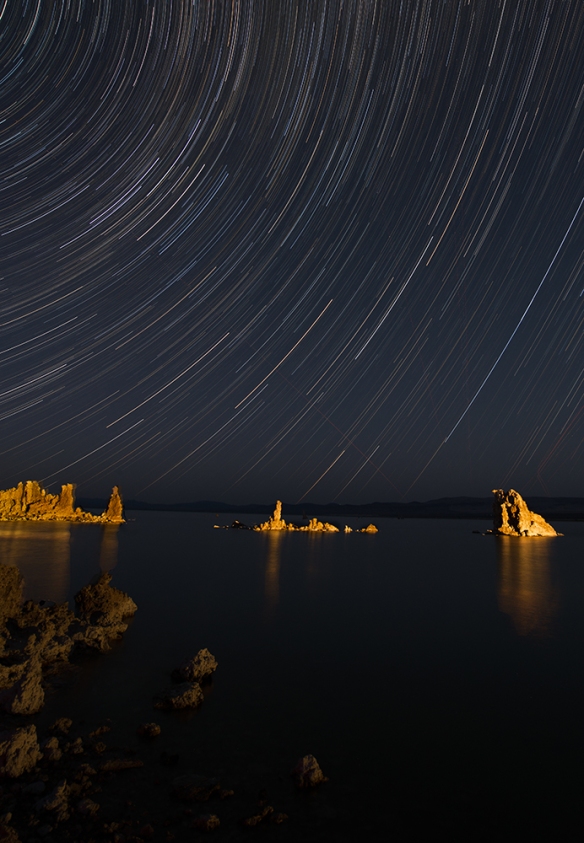