My submission to Stacy Fisher’s After-Before Friday Forum for Week 15 was taken at the Bodie State Historical Park in California earlier this month.  Bodie is a kind of preserved ghost town and, thanks to the leader of a photo workshop, our group of about ten photographers had the town to ourselves.  Gold was discovered here in 1859, but not much happened until the mid-1870s when a rich vein of ore was discovered. By 1879, the town was booming and population surged to some 7,000 people.  But a decline soon followed as better mining prospects were discovered elsewhere. By 1910, less than 700 people lived there and eventually the town was abandoned.

Today only 5% of the original buildings remain, but they all are fascinating as photographic subjects.  As the sun was setting, I started looking for a building that had windows facing to the west so I could catch the reflected colors of the sky and clouds and also include a good part of the sky in the overall picture.  The sky was much brighter than the building, so checking the histogram was critical in making sure that some detail would be present in the shadows of the building and the sky would not be blown out.  (Technical Info: Nikon D800E on tripod with 14-24 mm lens extended to 14mm; exposure 1/15th sec. @ f/16, ISO 400).  The aperture setting was to insure that both the building and the sky would be sharp.  In order to include more of the building on the left and sky on the right, two images were taken to capture the entire scene.  The final image would be a Photomerge of  the two images.  But the processing was the same for both in Adobe Camera Raw (ACR).  But to keep things simple, the initial “Before” image shown below is just one of the two shots.  This initial image shows the original file without any changes made in ACR.

As it turns out, almost all of the processing was accomplished with the tools in ACR.   The Screen Capture below shows the ACR dialog box with the changes that were made.  The red arrows identify the sliders and the adjustments were as follows:

Highlights: decreased to -21 (to tone down the bright spots in the sky and the windows)

Shadows: Increase to +48 (to open up the dark tones on the building and in terrain)

Whites: Increase to +25 (to set the white point)

Blacks: Decrease to -6 (to set the black point)

Vibrance: Increase to +28 (to bump up the colors in the sky just a bit and add warmth to the building)

The two images, both with these settings, were then opened in Photoshop and combined into a single panorama format using the Photomerge tool.  The merged result is shown in the image below. 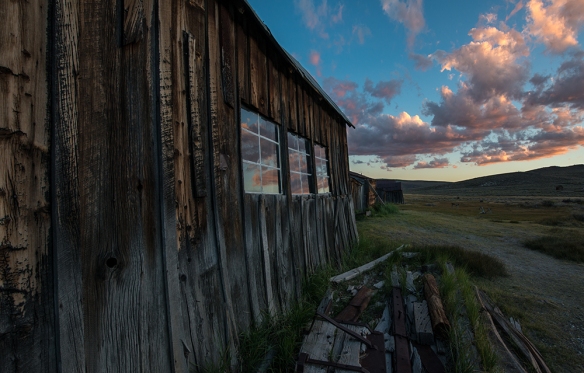 After Camera Raw and Photomerge

The final step was to darken the sky just a bit more. Using the Polygon Lasso Tool, (feather = 20 pixels) the sky was selected and then a Curves adjustment layer (blend mode = normal) was applied to recreate the colors that I saw that night.  The image below shows the Photoshop display after this step had been implemented.  The first five steps in the History panel (red bracket) show the steps of the Photomerge.  The remaining steps show the selection of the sky and the application of the Curves adjustment.

That was it for the Photoshop segment.  I tried a few other adjustments, such as darkening the reflection of the sky in the windows and also adding a touch of saturation to the overall image but none seemed to improve the scene, so it ended with just the one small tweak.  The difference is small and may be difficult to see in this smaller size, but the final result is shown below. 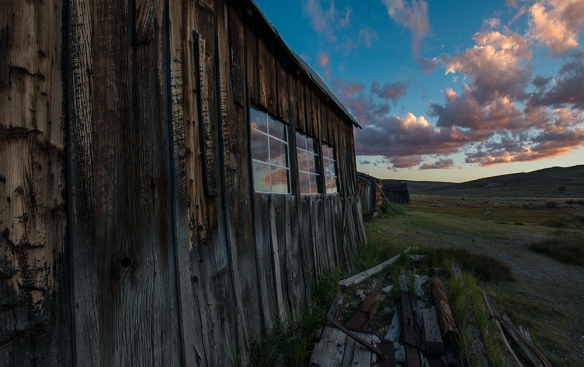 Thanks again to Stacy Fischer for organizing and maintaining this forum. You can see the other contributions at her site later this morning.  You will find some excellent examples of how others bring the image as they envisioned it into reality.

17 thoughts on “After Before Friday Forum Week 15”