My submission to Stacy Fischer’s After-Before Friday Forum this week is in response to some viewers’ questions about the techniques of producing a Star Trails image.  To do this, I won’t be showing the true “before” image because, in reality, about 20-25 separate images were used to produce the final result. So, the “Before” shown here is just a single example. And, had I shown all 20, it would be nearly impossible to tell one from another (with two exceptions).   And, I suspect, would produce many yawns among the few who took the time to look them over. Still, this is a pretty wordy approach so those not interested in techie talk may want to skip ahead when they see the acronym “ACR.”

These images were all taken on a single night in Bodie State Historical Park in California at a workshop guided by Michael Frye.   There are two ways you can make a star trails photograph.  The simplest way is to put the camera on a tripod, point it at the sky and when gets dark, open the shutter.  After waiting about 90 minutes or longer the shutter is closed.  That was not done here.  The second starts the same, with the camera on tripod pointing at the sky. But instead of making a single exposure, a timer (known as an intervalomter) directs the camera to make a sequence of exposures, one immediately after another, until the desired time has passed.  In this case, the exposures were 4 minutes long, so 22-23 exposures would be needed to cover a period of about 90 minutes. The sample “Before” image below was early in the sequence.

Example of a 4-minute Exposure in the Overall Sequence

Once the sequence starts, the camera isn’t touched until it is time to stop.  For the next 90 minutes, all that can be done is to worry about things that could ruin the entire evening:  will someone bump the tripod; will an unexpected vehicle with bright headlights pass through the scene; did I correctly step through that long list of settings (auto focus off; mirror-lock-up off; vibration reduction off; self-timer off); Will a nearby photographer turn on his/her headlamp; etc.  And in this case, two of those things happened.

Once home and after some sleep, the images were downloaded and opened in Adobe Camera RAW (ACR).   The figure below shows a screen capture of the ACR window with 5 of the before images.  For now, no ACR adjustments will be made; the important thing is first to determine whether one has a decent final image that is worth spending the time needed to perfect it.

The only choices made in ACR were in the Workflow Options Window.   The red arrow is pointing to the chosen options at the bottom of the screen (above).  Clicking on that line opens the Options window shown in the image below.

The choices have a lot to do with how the image will be published: as a large print, a smaller print, or on a display monitor (e.g., a website).   My choices are usually governed by the need to make large prints, so I typically opt for the color space that provides the greatest range of colors (ProPhoto RGB), the most information (16 bits instead of 8), and a resolution best suited for printing (300 ppi).   The image size is set to the Default native pixel dimensions of the camera (4912 X 7360).  The result is usually a very large file, about 200 MB.  However, the process for star trails engages all of these images simultaneously, the final image would easily top 4 Gigabytes, so the smaller 8-bit size was selected here.

Next, it is necessary to open all of the images stacked into individual layers as a single file. For Bridge users, this can be done by highlighting all of the selected files in Bridge and then click on Tools–>Photoshop–>Load Files into Photoshop Layers. (See Figure below)

Commands for Opening in Layers

The next thing that happens is a lot of churning by Photoshop as it lines up all of the layers on top of each other.  Depending on the power of your computer, you may wish to go get a cup of coffee while it whirls away.  After a period of time, if all goes well, something like the image in Figure below is produced. But wait!  This looks no different than the initial “Before” image at the beginning of this post. 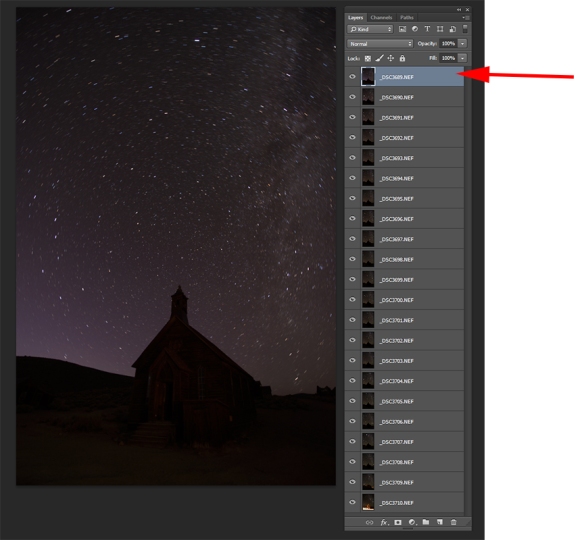 No need to panic, at least not yet.  Because what one sees at this point is no different than looking at the top picture resting on a stack of 20 other pictures–it is not possible to see through the first image.  One more step is needed to bring out the key information in the others.  All the layers except the bottom layer are selected to make them active, and then the blend mode in those layers is changed to Lighten. If the star trails do not appear now, it is OK to push the panic button.  This step is shown in the Figure below. The yellow

After Blend Mode Change is Made

arrows point to 21 top layers.  The red arrow at the top points to the blend mode=Lighten step.  The magenta arrow points to the bottom layer (last image in the sequence) which is not active, so the blend mode remained at Normal.  What is happening here is that the blend mode “reveals” only sections of each image that are lighter than that same part of all the images above them.  So, as the earth turns during the 90 minutes, the stars are in a slightly different section in each image and the 4-minute trace of light in that section is added to those above it.  The same is true for the building and car lights at the very bottom.

There is very noticeable problem, however.  The blown out bottom section of the image was caused by a car driving slowly through the scene with its lights fully illuminated. In addition, a less obvious problem is the small red lights near the right edge of the image caused by several photographers who briefly illuminated their headlamps not knowing they were in our shot.  started working in our scene a.(Remember those worries mentioned above?)

The second problem is easy to fix.  The layer on which the red lights appear can be made active and using a brush tool with the color black, one can paint over the red lights.  They are no longer brighter than the layers above and disappear.  The car lights are more difficult.  The easy solution is to just eliminate that image since it was the last one taken (Magenta arrow). (Eliminating one of the middle images would cause a noticeable gap in all the trails.)  But the lighting on the face of the church is nice, so a combination of cropping from the bottom and judicious use of the cloning tool made it possible to produce the image below.

Once again, many thanks to Stacy Fischer for organizing and keeping this forum going.  Please visit  her Week 16 post here and check out the excellent submissions of the other contributors.