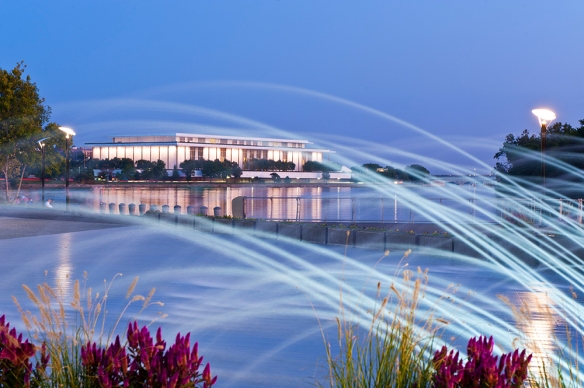 The Kennedy Center “After” Image

I am happy to once again submit an image to the After-Before Friday Forum sponsored by Stacy Fischer of Visual Ventures.  The Forum allows photographers an opportunity to compare examples of how they process their images to accomplish their creative vision .  Sometimes the changes are substantial; other times they can be minimal.   My submission for this week’s Forum is somewhere in between.  The fountain is in the Georgetown section of Washington DC but the Kennedy Center in the distance is the subject of the photograph.   The image below, the “Before” image is the original RAW file before any adjustments have been made. (Technical data: Nikon D700 on tripod with 24-70mm f/2.8 lens extended to 70mm; exposure: 2.0 secs @ f/13, ISO 200) 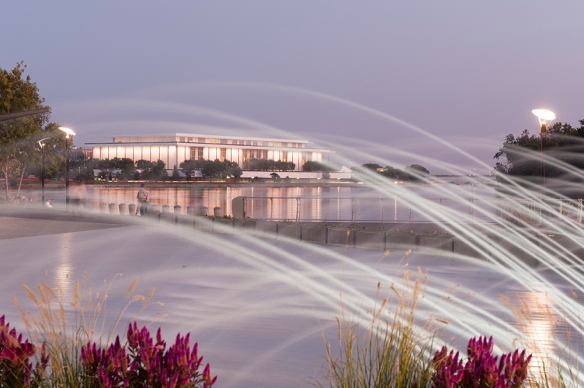 A number of issues are apparent when comparing the RAW image to the scene as I originally saw it.  Most importantly, the sky is too bright and does not have the actual twilight blue of that evening.  The screen capture below shows the adjustments that were made in the ACR window (red arrows).

The most important change was in the white balance.  As always, I had used Auto White Balance which usually does an excellent job.  In this case, the color temperature was moved from 4850 down to 4150 to obtain a “cooler” look, and the tint increase from -23 to -7.  The other adjustments were:  decreasing the Highlights to -57; increasing the Shadows to +12; setting the white by increasing the Whites to +13; adjusting the black point by decreasing the Blacks to -23; increasing the Clarity a substantial amount to +53; and increasing the Vibrance to +37.  These brought the image close to what the scene looked like on that evening.  It was then opened in Photoshop CC.

Not much more was needed.  First, as shown in the screen capture above, was an overall curves adjustment layer (red arrows) for a slight increase in contrast.  One of the optional presets, “Linear Contrast” seemed to work best.  The next step was to add a little more punch to the colors with a Hue/Saturation adjustment layer (red arrows) shown in the screen capture below.

The final step was to decide whether to remove some or all of the figures standing or sitting along the water’s edge.  Some had moved during the 2-second exposure and the lack of sharpness was distracting.  A combination of the Edit>Fill> Content-Aware tool and the Clone tool removed the blurred figures while leaving those that had kindly remained still during the exposure.    The “After” image is shown again below.

The Kennedy Center at Twilight

Once again, thanks to Stacy Fischer for sponsoring the Forum.  Please check out the other submissions at her Visual Venturing.  And if you aren’t following Visual Venturing already, you might want to click that “Follow” button now, because I understand she is planning to announce a special feature for the Forum in the next week or so.