Stacy Fischer’s blog VisualVenturing hosts the weekly After-Before Friday Forum that provides a unique opportunity for photographers to exchange ideas about post-processing their images.  There is always something new to learn from this exchange. This week’s Forum will be up later this morning and can be found here.

My submission for this week’s Forum was taken a few years ago in Claude Monet’s gardens in Giverny, France.  It was a cloudy day which can be really helpful for photographing flowers. But, as usual, the gardens were crowded with visitors so the best strategy was to search for individual blooms.  This little fellow was seemingly calling out for a portrait so I gave it a try.  The “Before” image above is the original RAW file with no adjustments.

A quick inspection indicates that, unless some special effects are being considered, the image does not seem to require any heroic measures.  The standard workflow began with the Adobe Camera Raw dialog window.     It seemed that the image needed to be a little darker overall to capture the mood of the cloudy day and also could use some added contrast.  The contrast slider by itself was too harsh, so after experimenting with a combination of the Whites, Blacks, Shadows, Highlights, and Contrast controls the most appealing combination resulted in the settings shown in the screen capture below. 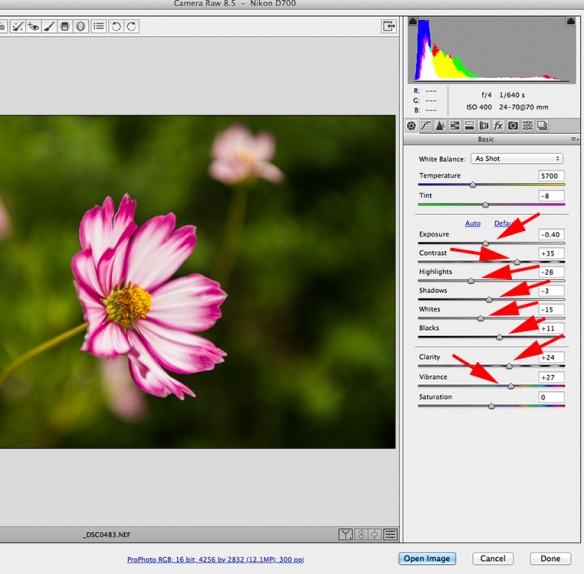 The image was then opened in Photoshop.  The only step remaining was to create a vignette to help bring the viewer’s attention to the central subject and give the image a little more depth (3-D effect?) to separate the subject from the background.  There are many ways to create a vignette and these were the steps I followed (see image below). 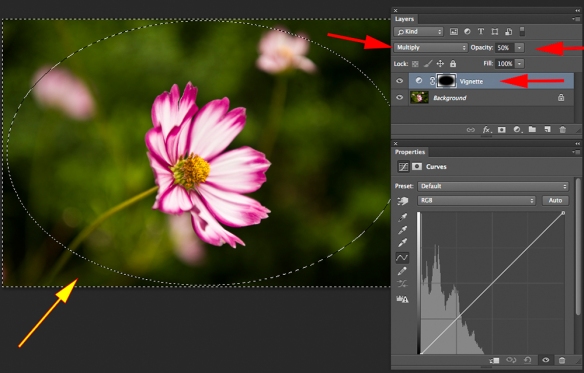 I used the Elliptical Marquee tool to select an oval shape around the central flower, making sure the “Feather” was set for a high number (usually above 50 pixels).  But since the area to be darkened is everything outside the oval selection, the next step was to click on SelectàInverse.  (See yellow arrow) I next opened a Curves Adjustment Layer, set the Blend Mode to Multiply and the Opacity to 50%, and changed the layer name to “Vignette.”  (See red arrows).  The curves histogram was not changed from the default setting.  Depending on the effect you are looking for, there is a lot of flexibility by using the controls for feather in the selection and the amount of opacity in the layer.

The final result is shown in the image below.  As you can see, the difference with the vignette is quite subtle.  Thoughts from readers would be welcome. 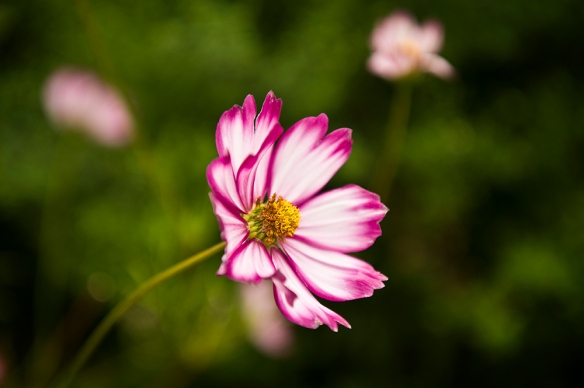 Once again thanks to Stacy Fisher for keeping the Forum on track.  The other submissions can be found at her Visual Venturing post here.  Please check them out.  And don’t miss this Forum next week; there will be a “twist” to the proceedings.   Stacy has sworn us all to secrecy, but it should be fun.