This last weekend, I was in New York City for a brief visit and spent a fair amount of time in Central Park, at least the area around the Bethesda Terrace.  The picture I posted last Sunday of the Bethesda Fountain was only one (although my favorite) of the several I took while there.  Here are a few more.

The Terrace’s quietest moments are in the early morning on weekends.  This image, taken on Saturday morning from an overlook balcony shows that dog owners are among the first to arrive with their canine companions.  The nearby roads are already bustling with bikers and runners.

The Terrace borders the Lake and is the second largest body of water in Central Park.  The image above, taken at sunrise, was taken from the pathway leading away from Bethesda Terrace towards Central Park West.  The twin towers are the San Remo co-op apartments, originally built in 1930.

The famous Bow Bridge is nearby, leading into the Ramble, which was described by Frederick Law Olmstead, the park’s designer, as a “36-acre wild garden.”  It is a rolling forest of trees, plantings, and wildlife. Once there, it is easy to forget one is in the center of New York City. Because of the park’s location along the Atlantic flyway migration route, the Ramble is the center of birding activity in the Park. The image above, taken in mid-morning, is the view as one emerges from the Ramble to cross the Bow Bridge and head back toward the Bethesda Terrace.  As I crossed the bridge a few minutes later, a young man was kneeling before his companion, asking her to marry him.

The nearby Loeb Boathouse has boats available for rent and, on warm afternoons, rowing a boat about The Lake is a popular activity.  One can also rent a piloted gondola for $30 per half hour (above).  The area around Bethesda Terrace almost always has several commercial photo shoots underway but the photographer in the boat has found a way to escape the competition for a prime spot.

In the late afternoon, I spotted a “Balloon Man” whose shimmering creations were delighting a trio of youngsters who had wandered away from a wedding party photo session.  This image was taken from the same balcony as the panorama image of the Terrace and Fountain above.  The balcony is immediately above a pedestrian pass-through that is illuminated at night (below).  The glowing gold of the ornate ceiling attracts photographers like a flame lures moths.  This image was taken while navigating two fashion shoots and a skillful itinerant musician playing a guitar and singing romantic tunes.

The Loeb Boat House not only rents boats, but also has a restaurant with some prime views.  By this time the image below was taken, the boat rental facility had closed, but the dinner hour was in full swing.  There is also a café that has a passable breakfast for under $7.00 starting at 8 AM.

Finally, it was time to leave  but as I walked back toward Central Park West, I was struck by the ethereal quality of the Bow Bridge as its white masonry took on a luminous quality in the evening twilight. 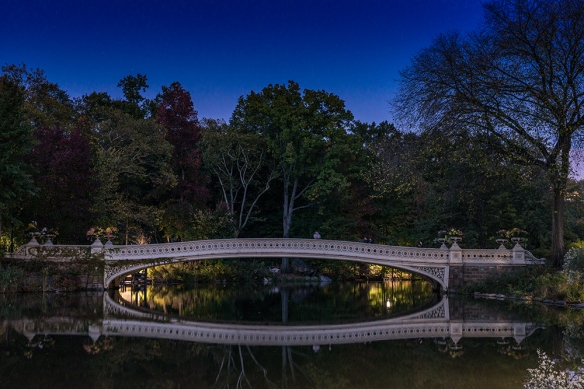