After 4 weeks of suspense, the participants of the ABFriday Anniversary Challenge  are simultaneously unveiling their individual interpretations of a single image selected by our readers.  The original image selected by the readers–an excellent choice I might add–is shown below.  You can see the other ten at Stacy’s ABFriday Forum Week 26.

Knowing that nearly a dozen other talented post-processors will be working on exactly the same image as you are has an interesting effect on one’s approach to the post-processing.  In my case, the two choices were: 1) Should I use the approach I normally use with my own images and bring out what the eye (probably) saw when taking the picture? or 2) Try something different?  It was a pretty easy choice: It would be Door Number 2!

Actually, as it turns out, I went through both doors because the only way to Door Number 2 was to first pass through Door Number 1.

The changes seen here were all made using various options in Photoshop’s Filter tool kit.  First, I made a number of adjustments in the Basic tab of the Camera Raw Filter as shown in the screen capture below (red arrows).

These changes brought out the strong colors and enhanced the contrast of the scene. But more was needed to add some drama to the sky and the water in the foreground.  Switching to the Gradient tab of the Camera Raw Filter, I moved the exposure slider to -1.7  (red arrow) and applied two gradients, one for the sky and one for the water (yellow arrows). 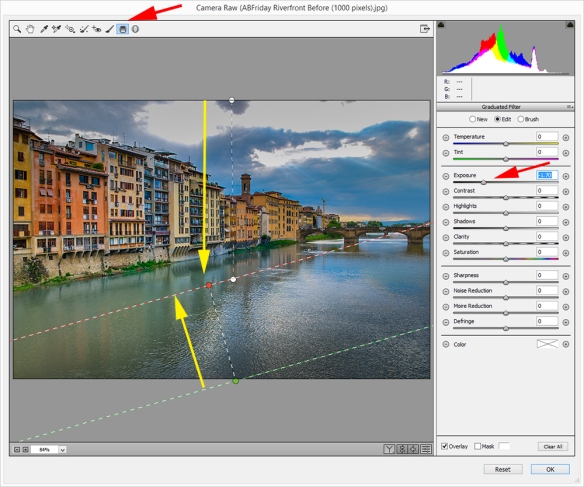 Note that the angle of the gradient for the water is parallel to the river’s edge.  I clicked the OK button and the results of the steps so far are shown below. It is a nice image and I suspect pretty close to what Karen was seeing when she took the picture (but she will be the judge of that).

At this point the image was ready to go through Door 2.  I will admit up front that the process from here was one of enthusiastic experimentation because I intentionally chose an area of Photoshop that I had never visited before and a lot of rejects are lying on the virtual cutting room floor.  To save you from a detailed description of the many dead ends I encountered let’s go straight to the series of steps that produced the final result.

So after a fair amount of time, I clicked Filter >Stylize>Extrude.  The dialog box that appeared is shown in the screen capture below. 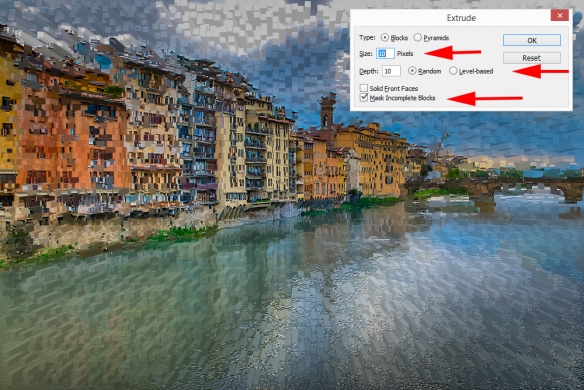 The settings shown (red arrows) are those that I chose, not the default settings.  This is a really cool tool, and different choices on these settings can produce radically different results.  The final result is shown below. 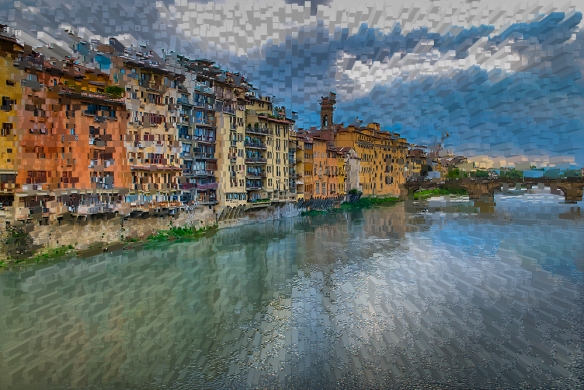 I liked what I saw here because it reminded me just a little of Cubism which set in motion the modern art movement of the early 20th century.  I’ll be interested in what you think.

Don’t forget to see the other interpretations by the other participants.  You can get to them by clicking here.  I can’t wait to see them myself.