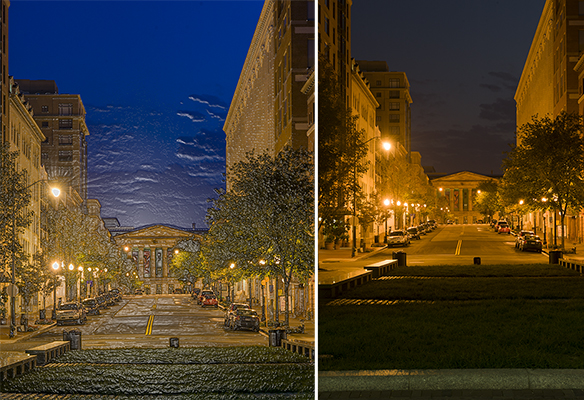 Each Friday, Stacy Fischer of Visual Venturing hosts a special forum on post-processing where photographers may submit images and describe their post-processing actions to achieve the final result.  This week marks the 29th consecutive episode and I fully expect there will once again be an interesting set of examples by the participants.  Here is the link for the ABForum Week 29 Central Command.  Please check it out. 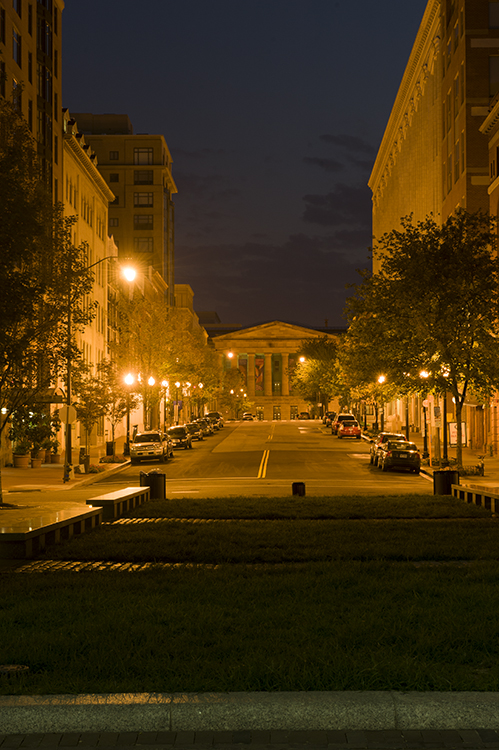 The above image is a “Reject” taken about four years ago and this week the idea was to see if a heroic rescue could be achieved.   After all, I had learned a few tricks since the image was taken and Photoshop has added a ton of new capabilities during that time.   But alas, a transformation from forlorn reject into a splendid representational masterpiece was not to be.

The original image is a long view of the Smithsonian American Art Museum looking north up 8th Street NW in Washington, DC and was taken about 45 minutes before sunrise. (Technical Data: Nikon D700 on tripod with 24-70mm f/2.8 lens extended to 70mm; exposure 3 secs. @ f/13, ISO 200)

The first step, as always, was in Adobe Camera Raw.  The adjustments made were as follows: White Balance changed to tungsten; Exposure increased +0.35; Highlights decreased to -68 to reduce the bright glare of the street lights; Shadows increased to +100 to open up the dark areas; Clarity upped to +38; Vibrance moved up to +37; and Saturation nudged to +8.  The results are shown in the image below.

Next, a variety of Photoshop actions were taken but there is no need to list them since they did not help much.  This left two choices: another image could be chosen and the process could start all over. Or, I could fall back on the techniques used  in last week’s Forum and abandon realism altogether. In other words, return to the hallucinatory environment known as Photoshop’s Filter Gallery.  So that’s what happened and the image below is the result (Technical details at the end of the post).

I’m not sure this is a great result; it might be better if some of the upper portion was cropped out to eliminate the untextured part of the sky. Any thoughts from viewers would be welcome.

Techie stuff about the method:

The image was cropped to eliminate the unattractive foreground.  When using the filter gallery one needs an 8-bit image, a 16-bit file won’t work.  To verify this, just click on Image->Mode and make sure 8 bits/channel is checked in the drop-down menu.  The second rule, at least for those (like me) who don’t have extensive experience with the Photoshop filter gallery, is to just try each option until you find something that works well.

When ready begin, click on Filter–>Filter Gallery and a large display panel will open. A partial screen capture is shown above. The choices are listed on the right side and a preview of the image is displayed in a large panel on the left (mostly not shown).  I started with the variations listed under Artistic (blue arrow) and merely worked my way down looking for one that had some possibilities.  After 8 strikes, I landed on “Plastic Wrap” (red arrow) and, as I did with the others, started adjusting the three controls.  The settings I chose are shown in the screen capture (yellow arrow).

Again, thanks to Stacy for keeping this Forum running smoothly and thanks to the other participants who make this such an interesting weekly event.  Please check out their submissions at Visual Venturing’s  ABFriday Forum Week 29.