The ABFriday Forum, managed by Stacy Fischer is an opportunity for photographers of all levels to exchange ideas of making creative adjustments in a photograph after the shutter has closed.  My submission this week was taken five years ago this week in West Virginia’s Blackwater Falls State Park.  The stream is Shays Run, just below Elakala Falls.  And if you think it looks cold, you are right.  Please visit Stacy’s Visual Venturing site to see the other submissions. 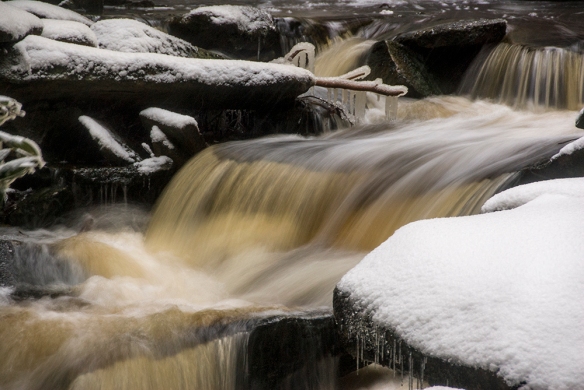 As usual, the first step in my workflow was to open the image in Adobe Camera Raw.  The adjustments made are shown in the image above.  The settings were as follows: Exposure: +0.20; Highlights: -2; Shadows: +58; Whites: +58; Blacks: -33; Clarity: +33; Vibrance: +23.  The goal here was to bring out the white in the snow and to open up the shadows in the dark areas.  But I knew a little more work would be needed in Photoshop. 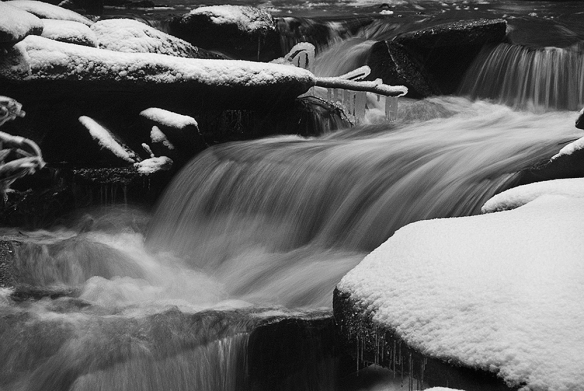 I didn’t like the brown color of the water in the image, even though it is a natural condition resulting from tannic acid of fallen hemlock and red spruce needles.  You have to be there to appreciate it. I decided to go with black and white.  But first, I wanted to get a little more detail in the snow in the upper left and lower right corners.  This was accomplished with a  Levels Adjustment Layer (Blend Mode Normal). Then I used Channel Mixer, checking the box for Monochrome and staying with the Default settings.  The image was still a little flat, so I used a Curves Adjustment Layer (Blend Mode Normal) to increase the contrast.

Other than the conversion to Black and White, the adjustments are relatively modest. I felt  radical surgery wasn’t needed and  I’d be interested in your thoughts.  And don’t forget  to check the other submissions at Visual Venturing here.

24 thoughts on “After Before Friday Week 33”