The philosophy of the After-Before Friday Forum is to discuss how to take an image you’ve captured and change it into the image you want it to be.  Usually, the approach is to make the changes during “post-processing” where the original image is optimized using Lightroom, Photoshop, or some other software program(s).  But there are no rules, so this post will have a new wrinkle—how to improve the original image by evaluating your results in the field and making some significant changes on the scene before you get anywhere near a computer.

The first image of this scene (Theodore Roosevelt National Park in North Dakota) is shown above.  It is what I call a “Parking Lot Shot.”  I saw the scene, liked the leading line of the path up the hill as it curved around the tree on the hill, and stopped the car to take the shot.  But I wasn’t thrilled with the result.  There was something missing.  The empty sky looked….well, empty.  Behind me was a path up another hill that would give a different angle so I walked up that hill and realized that there was a totally different scene waiting to be captured.  I took the shot and liked what I saw much better.  A little more work would be needed in Photoshop, but this one seemed to have more promise. 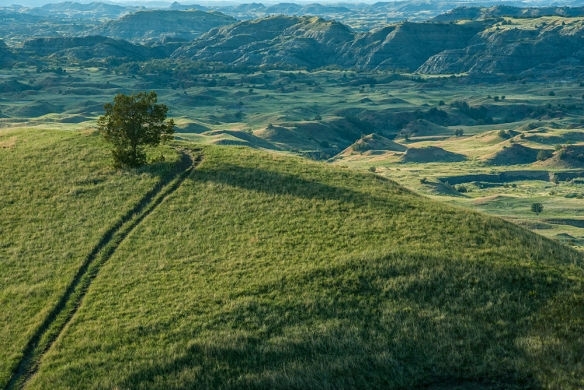 2nd  Image, from the Hillside Above

On returning home, the first step was to give a small boost to the overall contrast, and I used a Curves Adjustment Layer.  I chose the Linear Contrast preset (red arrow), left the Blend mode on the default setting of “Normal” (yellow arrow) and the Opacity at 100%  (green arrow).  The screen capture below shows the settings.

Next, it seemed that the greens needed a little punch to restore the look of what I saw that afternoon so a Hue/Saturation Adjustment Layer was used, with the colors set to “Green” (green arrow), the Saturation to +42 (yellow arrow), the Blend mode on the default setting of “Normal,” and the Opacity at 100%.  The screen capture below shows the Hue/Saturation settings.

The mountains and sky in the background were too light, and a gradient filter effect was the logical way to go.  I created a new layer, selected a gradient (foreground to transparent), and dragged the mouse down to the large tree (red arrow). I have promised in the past to do a more detailed discussion on the gradient tool, and I still intend to do so.  But not today.  I chose “Soft Light” as the Blend Mode (yellow arrow) and left the Opacity at 100%.  The settings are shown below.

But the sky at the very top edge still was a bit too bright.  So the Gradient Tool was deployed one more time.  But only with a slight touch.  The mouse was dragged down a very short distance, the Blend Mode was “Soft Light” again, but the Opacity was cut back to 80%.  The final result is the “After” image for this week and is shown below.  The differences from the original “2nd shot” are small, but the difference between the first and second locations is pretty substantial.

So, it often is a good idea to evaluate initial results in the field and make some adjustments in the point of view rather than passing the buck to Photoshop right away. Or, as I like to say….

Check out the submissions of the other participants this week.  There is always something interesting over there from some very talented photographers. You can find them by clicking here.