Today marks Week 55 in the AfterBefore Friday series managed by Stacy Fischer of Visual Venturing.  It’s open to anyone and participants share their approach of transforming one of their own images into its final form, an expression of their creative vision.  You can find links to all of the other participants here.

I thought this would be a good opportunity to try out one of the new tools that appeared in the most recent Photoshop CC upgrade.  Most writers have been rhapsodizing about the new “Dehaze” tool, but I have been far more pleased by the integration of the Photomerge capability into the Adobe Raw Camera (Version 9.1) process. 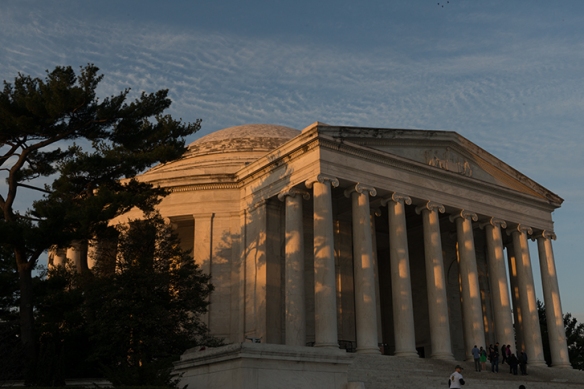 Original Image (one of four)

The above image is one of four used to produce an overall image the front of the Jefferson Memorial at sunrise.  Longtime readers may recall that I used a single image from this set in ABFriday Week 44.  But that was to produce a much tighter crop. This week it will be a wider view to include the tree on the left side of the building and some balance on the other side.  Now, I could have captured all of this in a single image using a wide angle lens, but I wanted to avoid the distortion of an extreme wide angle and I also wanted to be able to make really big prints if the image turned out nicely. (Technical: Four images with a Nikon D800E; 24-70mm f/2.8 lens at 42mm; Exposure: 1/160th sec. @ f/16, ISO 400) 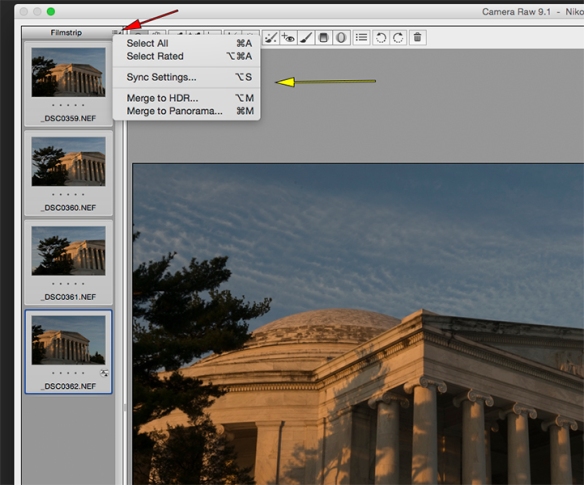 The screen capture above shows the Adobe Camera Raw (ACR) display window with the  four RAW images opened as the first step for a photomerge.  In what must be one of the most obscure placements of a functional command in history, Adobe has seen fit to place this teeny little button in the upper left corner of the window, just to the right of the word “Fimstrip”  (Red Arrow).  If you select 2 or more images and then click on that little spot, you get the flyout menu (Yellow Arrow) that is displayed showing several options including “Merge to Panorama.” 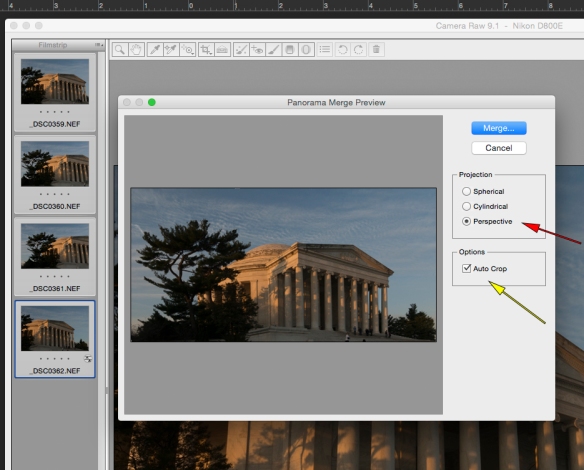 If you click on that command, a preview window quickly appears as shown in the screen capture above. The ACR process has chosen which of three “projections”  it believes will produce the best result which, in this case, was “Perspective”  (Red Arrow). If you are not happy with that one, you can click on one of the other two to compare the results. It also provides a preview of an “Auto Crop” (Yellow Arrow) which essentially cleans up the ragged edges of a typical photomerge process.  A very nice touch, I thought. The image below shows the result when this box is unchecked. 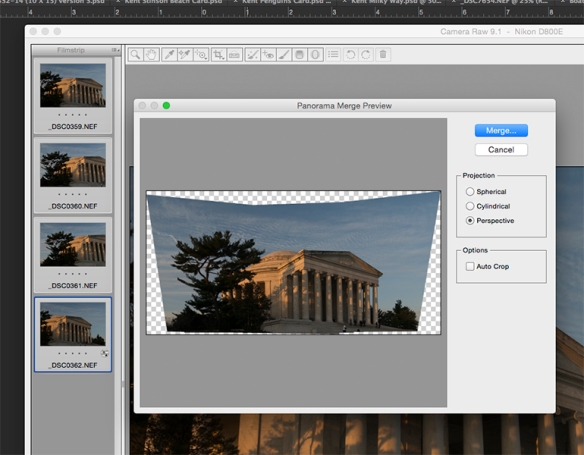 In some cases, one may decide to handle the cropping on their own, but it obviously did a fine job here.  Once you are happy with the result,  click on the “Merge” command and it quickly goes to the “Save As” function as shown in the screen capture below.  Just give the file the approapriate name and select the folder in which it is to be saved.  So far about 60 seconds have passed. 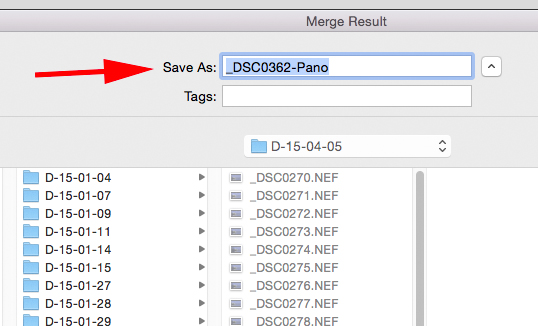 As shown the Screen Capture below, a new thumbnail of the photomerge has appeared in the filmstrip (Red Arrow) and is ready to be processed like any other RAW file. 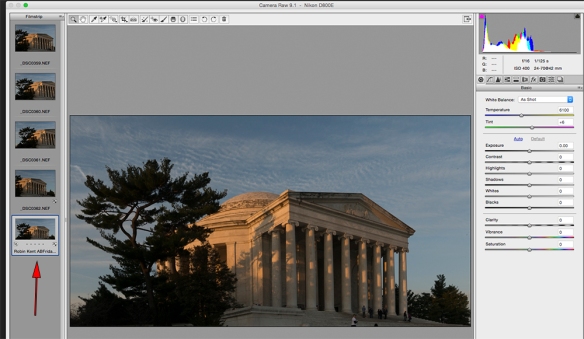 ACR Window after Save Command is Executed

From here one just uses their standard workflow.  In this case I used the follwing settings: Highlights decreased to -31; Shadows increased to +73; Whites increased to +57; Blacks increased to +16; Clarity increased to +30; and Vibrance increased to +39.  The image was then opened in Photoshop, where I spent some time removing a few of the people on the steps.  The final result is shown below. 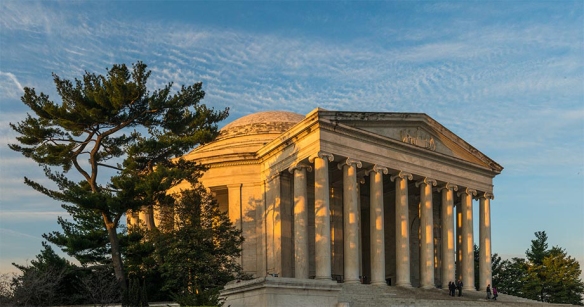 Comments and Questions are welcome.  Please be sure to check out the other examples of post-processing techniques at Stacy’s post, ABFriday Week 55.