My previous post about a week ago featured a sunrise image of the Jefferson Memorial taken last April. So it might be appropriate to look at some additional images of the Memorial, but this time with the moon, especially since there was a full moon last night.

The conditions may not have been perfect, but they were pretty close.  There was absolutely no breeze, so the tidal basin would produce a nice reflection.  The sky was clear, ensuring that the moon would be visible.

When photographing the moon, I prefer to use a telephoto lens to emphasize the dramatic effect of the moon.  The foreshortening effect makes the moon seem larger, especially if the camera is fairly distant from the primary subject which in this case was the Jefferson Memorial.  Last night, however, the location of the moonrise on the horizon dictated that the ideal place from which to shoot would be fairly close to the Memorial.  To get the entire Memorial, its reflection, and the moon in a single image would force the use of a lens no longer than 100mm.  But to emnphasize the moon’s size, it would be necessary to shoot with a 200mm setting.

The solution, of course, is to use the photomerge technique in Photoshop, Lightroom, or one of the several plugins available for this purpose.  The above image represents four separate images merged in Photoshop. (Technical data: Nikon D800E on tripod with 70-200mm f/2.8 lens extended to 200mm. Four exposures each at 1 sec., f/16, ISO 400)

Now there is another way to acquire a larger moon, which is considered by some (including myself) as a form of cheating.  An example is shown below. 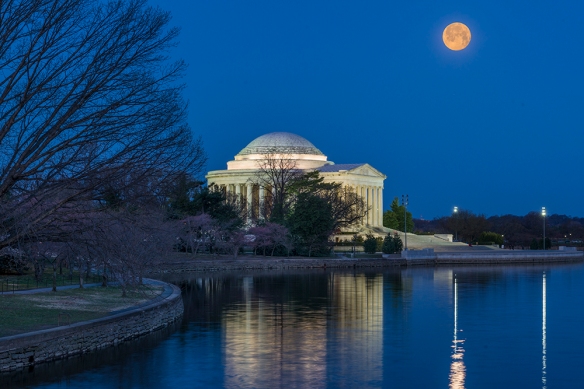 In this case, the moon was exceptionally bright and would be extremely overexposed. While HDR might be one option, there was a 7 or 8-stop difference between the correct exposure for the overall scene and the exposure needed for the moon.  Instead, it seemed like a good opportunity to experiment with blending two separate images.  This involved shooting the overall scene with one lens and the moon with a separate lens and then combining them in Photoshop.  I’m not thrilled with the result, mainly because it looks faked to me but maybe that is because I know it was.  (Technical data: Nikon D800E on tripod with 24-70 f/2.8 lens extended to 70mm; one exposure at 2 sec., f/13/ ISO 400.  Moon shot with 70-200mm lens extended to 200mm; exposure at 1/40th sec @ f/16, ISO 400)

The next full moon will be on the night of August 28th.

19 thoughts on “Moon Over Jefferson Memorial”