This week’s ABFriday Forum was in serious jeopardy of not happening because our usual hostess (Stacy Fischer of Visual Venturing) is out of town this week.  However, a heroic rescue by Loré Dombaj of “Snow’s Fissures and Fractures” has made it possible for all of us to continue.  As usual, this week’s forum allows pparticipants to submit an example of  how they transform an image to reveal their creative vision.  You can see all of the others at Loré’s post here.  And as always, you can get all the guidelines for participating in this forum by checking out Stacy Fischer’s site here.

Sometimes its a good idea to go back and review the image files from a major shooting session to see if a good image might have been overlooked.  This week’s submission to ABFriday is an example. 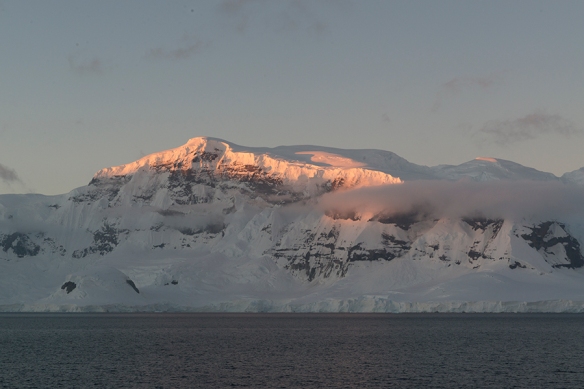 The above image apparently escaped my attentiona few months ago when I was selecting images for an exhibit. on Antarctica.  But this image caught my eye during a subsequent review of the image files a couple weeks ago.  I remembered the scene as being much more colorful and thought there might be some potential.

The scene was taken as our boat was heading north in the Gerlache Strait at about 10:45 PM. The sun’s last light hitting the top of the mountain was similar to the alpenglow effect I had seen in the past.

As usual, the image was first opened in Adobe Camera RAW.(ACR) and the adjustments were fairly standard (setting the black and white points, reducing Highlights, opening up the Shadows, adding some Clarity and Vibrance). Then, in Photoshop CC, two Curves Adjustment Layers were added, one to increase the contrast of the mountain and snow, the second to darken the sky.  A Hue/Saturation Adjustment Layer was used to slightly increase the saturation of the sky. Next a bit of the sky was cropped out for balance in the composition and, as a final step, a gradient layer was used to darken the sky (Blend Mode: Soft Light).  Now it looked like the scene I saw that night. 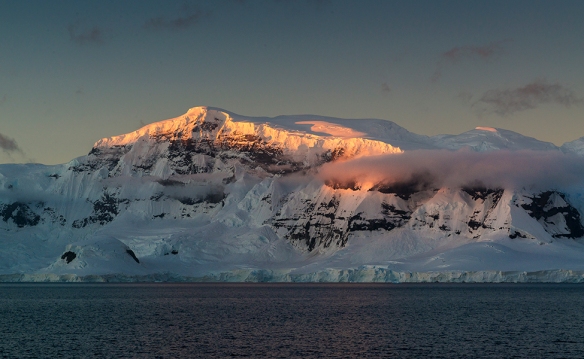 Thanks again to Loré Dombaj for organizing this week’s After Before Friday Forum.  Please visit her site to see all of the other submissions by clicking here.