The massive memorial to Ulysses S. Grant, like so many of Washington’s monuments and memorials, has long suffered from neglect.  (See, for example, a January 2011 article in the Wall Street Journal).   Now at last, as reported in today’s edition of the Washington Post, a restoration project is underway. 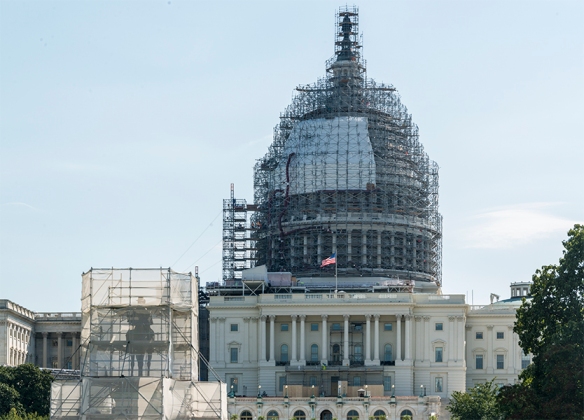 When I first photographed the memorial I knew much about Grant, but nothing of the history of the statue.  But I had available a most valuable resource: James M. Goode’s imposing reference, “Washington Sculpture” and found a story that fascinated me.

In 1901, a young, unknown sculptor, Henry Merwin Shrady, submitted design for a prestigious commission: a memorial statue of Ulysses S. Grant and the largest ever commissioned by the US Congress at that time. His 22 competitors were experienced, well-known artists and a furor erupted when the 31-yar old was selected.  He was selected a second time when one of the losers demanded a retrial.

This one work would consume Shrady for the rest of his life, which tragically ended 20 years later and just a few weeks before the memorial’s dedication.  Before he began his work, Shrady conducted intensive research on Civil War history, immersing himself in the details of uniforms, military practices, and the anatomy and physical movement of horses. He was loaned actual uniforms by the secretary of war. West Point and other military schools conducted special drills for him to observe artillery and cavalry maneuvers.  And he investigated much, much more in his unending efforts to bring authenticity to even the smallest aspects of his work.

But despite his premature death, the memorial Shrady produced was unlike any other in the U.S. up to that time. It is vast, with a base 252 feet wide by 71 feet deep, and was the largest bronze-casting project ever undertaken. At its center stands an equestrian statue of Grant. Flanking him, albeit some distance away, are clusters of warriors: a Cavalry Group to the north and an Artillery Group to the south. 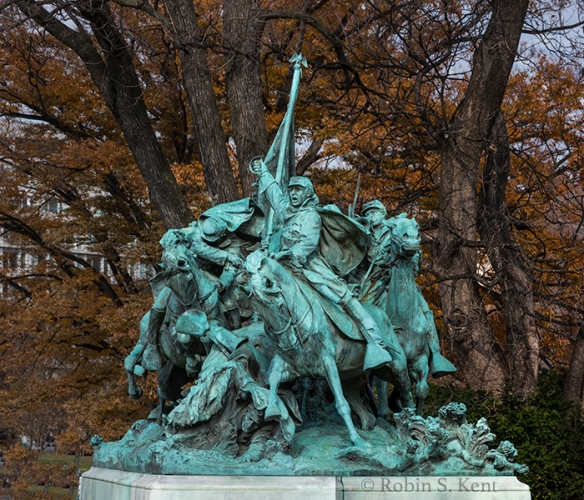 (Note the tarnished green stains and missing sword blade; note also the face of the fallen soldier under the hooves of the lead horse-thought to be a self portrait of the artist)

Shrady obtained numerous postponements, fending off demands for deadlines while dealing with numerous challenges such as a fire that destroyed the foundry responsible for casting the bronze components and political fights over the proposed location of the memorial. 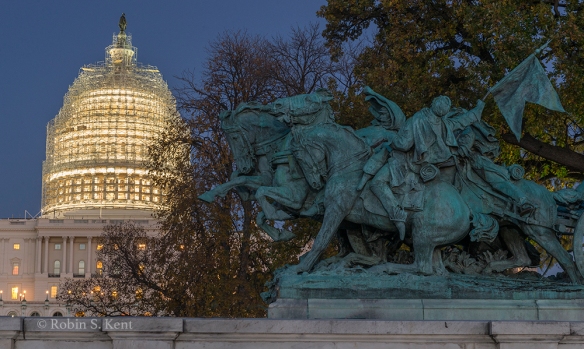 I’m looking forward to the completion of the renovation project, the memorial will have a totally different look, and new opportunities for photography.  But when the scaffiolding is taken away, those who live here should go back and take a close look at what is by far the most dramatic work of sculpture in the city.  In the meantime,