Iceland is a land shaped by fire, ice, and water.   It sits astride two major tectonic plates which are being gradually forced apart by the pressure of molten rock deep within the earth.  At the surface glaciers inexorably move through the mountains, slowly carving new landscape formations.  The melting ice from the warming climate and heavy rainfall in the mountains generates innumerable waterfalls, some tumbling over cliffs 200 feet and higher.

As a result, there are spectacular opportunities for the landscape photographer when weather conditions cooperate.  During our time in Iceland, we were treated to a few special moments but more often found ourselves in fairly challenging conditions.  But the challenges are part of what motivates us to take our cameras outdoors whenever we can.  Because sooner or later persistence will be rewarded with a magical ephemeral moment.  A moment you never forget.

One of the favorite spots for photographers in Iceland is the small blue glacial waterfall called Brúarfoss. Although well known to visitors, it can be extremely hard to find.  Fortunately, we were on a photo workshop led by Ian Plant, ably assisted by Alex Mody, and Ian unerringly directed our driver through a maze of unsigned dirt roads to a trail head.  After a short hike we were there and it was immediately obvious why everyone wants to see it, even in poor weather conditions.

The next day we arrived at Gullfoss (Golden Falls, located in the canyon of the Hvítá River) for a sunrise shoot, but my efforts to capture the grandeur of the monster cataract were mostly unsatisfactory.  However, a few attempts were OK and are shown below.

Early Morning at Gullfoss, View to the West 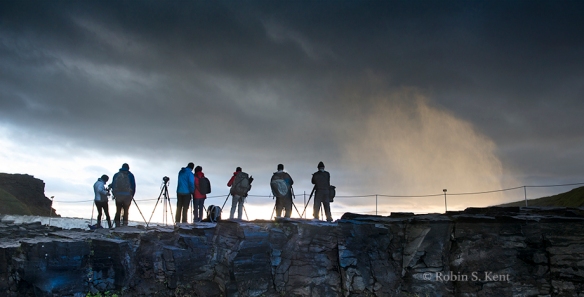 At midday, we got a break in the weather just as we arrived at Seljalandsfoss, located close to the Ring Road (Route 1).

Seljalandsfoss is a waterfall approximately 200 feet high.  It has a cavern to the sides and rear that allow people to walk behind the falls.  This image is a side view from within the cavern.