When you are trying for the classic moonrise over the city of Washington, DC, everything has to go perfectly.  Several of us made the effort on October 26th, knowing the weather would be bad on the following night, the night of the full moon.

We also knew before we arrived that conditions would not be perfect because the moon was coming up 15 minutes before sunset and it likely would be too high in the sky by the time the twilight blue was at its peak and the illumination of the Lincoln Memorial, Washington Monument, and US Capitol were in balance with the ambient light still in the sky.  We also knew that the clouds could pose problems.

But, when we arrived, there was an additional problem.  The Marine Corps Marathon had been held on the previous day and our chosen location (near the Marine Corps Memorial) was also the location of the finish line for the race.  A massive disassembly effort was underway. 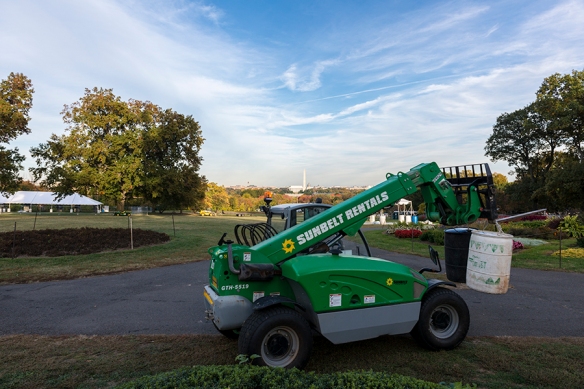 Passing Truck, 4 Minutes after Moonrise (not visible yet)

But, aside from the occasional passing vehicle, there was nothing that was directly obstructing the view.   By 6:15, the official time for the sunset, the moon was already pretty high and it was still too bright to see the illumination on any of the buildings below us. 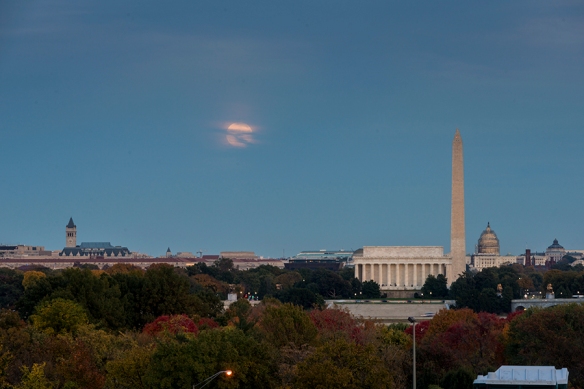 At 6:30, the twilight was a nice blue color, the clouds had abated, but the moon was too high. 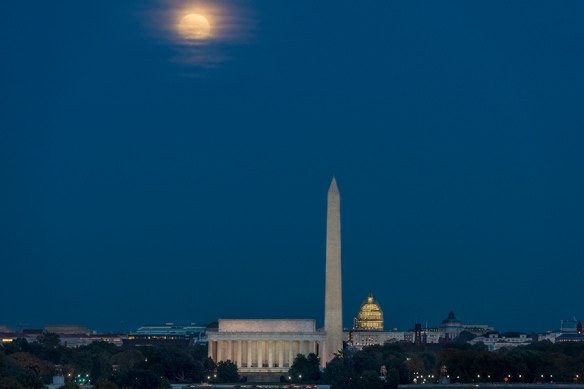 So the only solution was to back off the focal length, and take the full scene and then do some post processing cheating.  The image above was taken with the telephoto zoom extended to 200 mm and the moon in its actuual location at the time.  The image below, taken a few seconds later with a 145 mm focal length, shows the moon in a decent location.  But it was just “moved” down during the postproceesing from where it was at the time the image was taken.  Not a bad result, but not something I will post on my website or offer for sale. 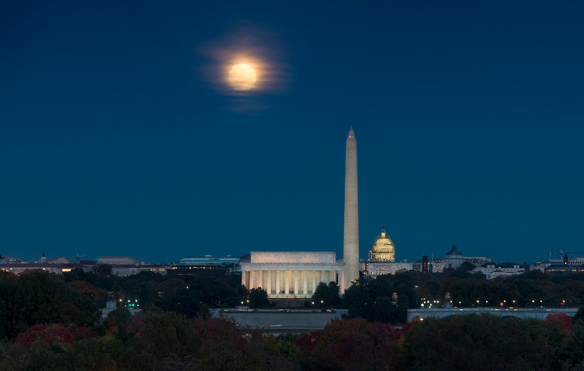 It’s been a busy time since the eclipse on 27 September, primarily because I am running around trying to get ready for my Open Studio Event in 7 days. But that is a subject for another post.  Today, it’s time to bring out some more images from Iceland.

Readers may have noticed that Icelandic place names tend to be extremely complicated and hard to pronounce.  But there is at least one exception, the small town of Vik located on the south coast.  Perhaps the most notable feature here is its black sand beach, characteristic of a country populated by active volcanoes.  Not far away are the cliffs of DyrhÓlaey where we spent the good part of the afternoon.  One doesn’t have to walk far from the parking lot to get a good view.

The classic vista here, however, is from a promontory that looks back toward the cliffs.  It is only about a 10 minute walk from the location shown above.  This is a perfect example of how the scenery can radically change in a very short distance.

View from the Promontory, Looking West

And after a 20-second stroll to the opposite edge of the promontory one is treated to this view.

View from the Promontory, Looking East

That evening, the group visited the Reynisfjara Beach, best known for its sea stacks.  One thing to remember about photographing on a beach close to the water is the need to pay close attention to the waves.  I have always observed that precaution, except for approximately 3 seconds on that evening when I turned to respond to a question from another member of the group. In that brief moment an unusually large wave pounded ashore with surprising speed and water was suddenly rushing past me above my knees. I turned to rescue my camera and tripod but it was too late.  My camera was down, I followed, and I saw another member of our group being dragged into the ocean while he desperately held his camera and tripod above the water surging around him. One of the tour leaders reacted quickly and grabbed that camera before the water claimed it.  With his hands free, the downed member was able to get back up about the same time I did.  I retrieved my camera but it was ruined, as was the lens.  The photographs on the card, however, were unharmed.  The image below was taken just a few minutes before this happened.

Fortunately, I had a back-up camera body and lens and managed to capture the sunset about 40 minutes later.

Keep Shooting (but watch those waves)…….