It was early morning and the ship was moving cautiously through the gloom of Lancaster Sound.  A light rain driven by a brisk wind pelted the foredeck but our eyes were riveted on the hulking island that lay ahead of us.  We were now in the waters of the Canadian Arctic Archipelago following the track of 19th century explorer Sir John Franklin who had searched for the elusive Northwest Passage 160 years ago.  Our goal today was to land on Beechey Island, and we all knew this was where his ill-fated expedition had begun to unravel.

Scouting Team Heads to the Shore of Beechey Island (8:45 AM)

Even today, transiting the Northwest Passage is not a routine undertaking.   What Franklin and his 129 crew members were attempting in 1846 would not be accomplished for another 60 years. The environment here is far less hazardous now than it was then. In fact, it is much different than it was 10-25 years ago.

What sets Franklin’s attempt apart from the many other failures was the enormity of his disaster.  The full story still is not known but the two ships and all 129 aboard essentially vanished.  As numerous search expeditions gathered clues over the next decade, it became apparent that the two ships had been trapped in the ice, were abandoned, and the survivors had begun an agonizing and horror-filled death march through a frozen and merciless landscape in a vain attempt to find help.  It was not until 2014 that one of the ships was found; the other was still missing although we knew an active search was underway several hundred miles to the south (see red arrow on map below).

Ruins of Northumberland House, built in 1853-54

The image above shows the remains of a supply depot constructed to support the massive rescue effort for Franklin and his crew.  The depot quickly proved its value in 1854 for the crews of the supply ship that sank offshore and four other ships that had been trapped in the ice and were abandoned.  (One of the latter four, the Resolute, eventually broke free on its own, was found 18 months later by an American ship, was refitted, and given back to the British.  Two decades later, wood from the decommissioned Resolute was used to make 3 desks, one of which was a gift from Queen Victoria to the US President.  It is still in the Oval Office.) 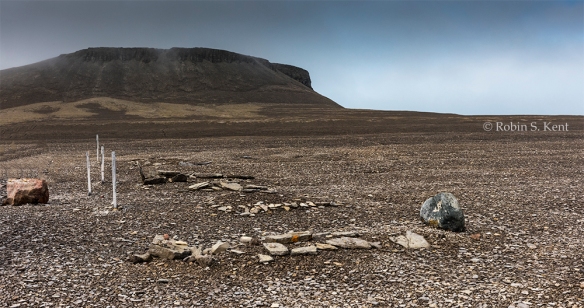 It was on Beechey Island that the first clues to Franklin’s fate were found by a search party six years after he disappeared.  Remains of several small structures and other relics showed they spent their first winter here.  More ominously, the gravesites of three of his crew members indicated that problems had already occurred (see image above).  But 126 men and the two ships were unaccounted for and their prospects were grim.  It was now 3 years after their supplies would have been exhausted.   And the barren landscape surrounding the gravesites hinted at the horrors that faced the crew at that point. 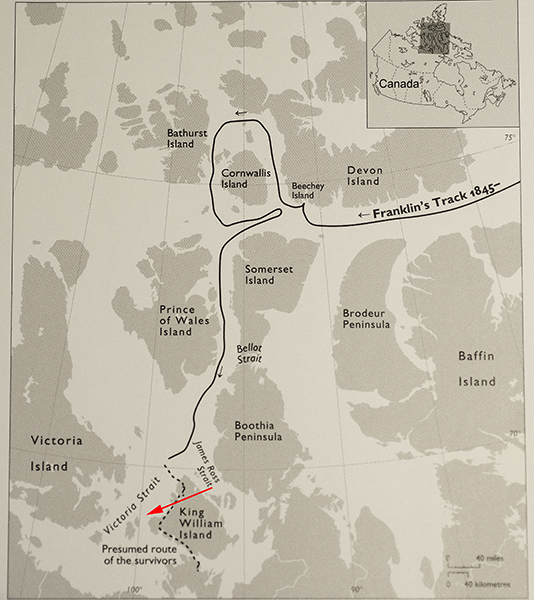 Some 40 expeditions were launched in the search over the ensuing decades and little by little, more clues were uncovered.  Today, much more is known but key elements remain a mystery.  The Zodiac ride back to the comfort of our ship was subdued as we tried to imagine how different the conditions were in those days.  We had yet to even encounter a piece of sea ice.

As if reading our minds, the captain decided to alter the route to give us a glimpse of sea ice conditions (see image above). It stretched for a number of miles but was neither as thick nor as expansive as one would have encountered only ten years ago.  We would experience sea ice only one more time and that also would require a substantial route deviation.

As we left Barrow Strait and headed south into Prince Regent Inlet which separates Brodeur Peninsula and Somerset Island.  We would learn more about Franklin’s fate in the coming days as we neared the area of the  Franklin expedition’s terrible finale.