Today is Abraham Lincoln’s birthday, a man who is regarded by many as the best President in the history of the United States.  The Lincoln Memorial is my favorite of the many monuments and memorials in Washington and has been the subject of many of my photographs.  I thought it would be appropriate to share a few of those images on this day.

Although sentiment for a memorial to Lincoln appeared almost immediately after his assassination in 1865, it was not until 1914 that construction began.  It opened to the public in 1922.

But even before funding was found and construction begun, considerable thought had been given to its placement by the little remembered Senate Park Commission Plan of 1902.  This group envisaged the now iconic overall design of the Washington National Mall with the Lincoln Memorial featured as the western anchor.

The fact that the Memorial is facing exactly due east and that its interior is open to elements, as envisaged by the 1902 Commission, made the photo above possible.  The alignment is such that only on a few days around the equinox (Spring and Fall) will the rising sun perfectly illuminate the statue of Lincoln with no shadows from the outer columns.  The alignment is perfectly centered for about 20 seconds. 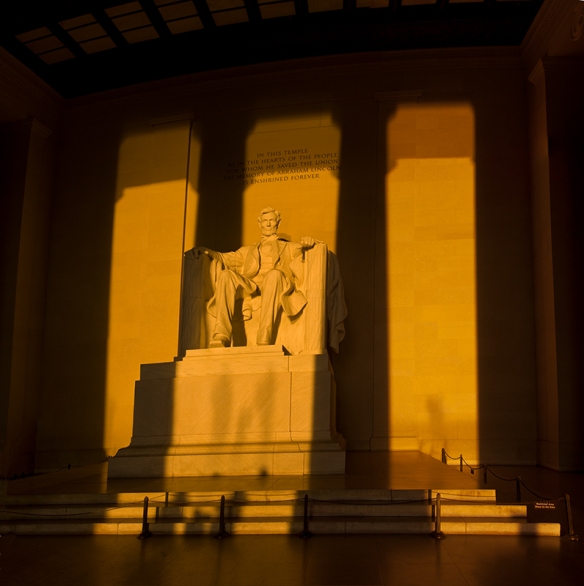 Interior, Fall Equinox 2009 (about a minute after alignment)

Even though the alignment occurs twice each year, one must also have clear skies in the east just as the sun rises, so this moment is relatively rare.

But neglect over time has allowed both of these beautiful structures to deteriorate. For example, the above images of the Memorial’s steps reveal that they are quite dirty, a result of the inability of the National Park Service to obtain funding for such maintenance tasks. Observant visitors will find many examples of serious neglect throughout the structure. Fortunately, a major restoration over the next several years has been made possible by an $18.5 million donation by a private citizen, David Rubenstein.  The Memorial Bridge has also been in need of major repair and work has finally been scheduled. 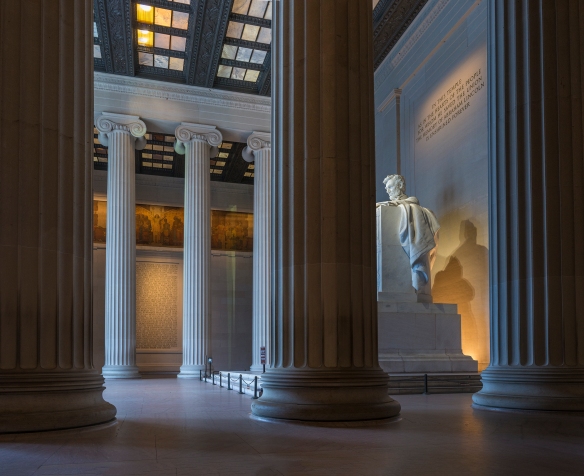 The interior is still a beautiful space, however.  Depending on the natural light entering the chamber, the interior can take on many moods and repeat visits are worthwhile.  Most visitors spend their time gazing at the massive but elegant statue of Lincoln created by Daniel Chester French.  The actual carving of the stone by the Piccirilli brothers, immigrants from Italy, required four years. 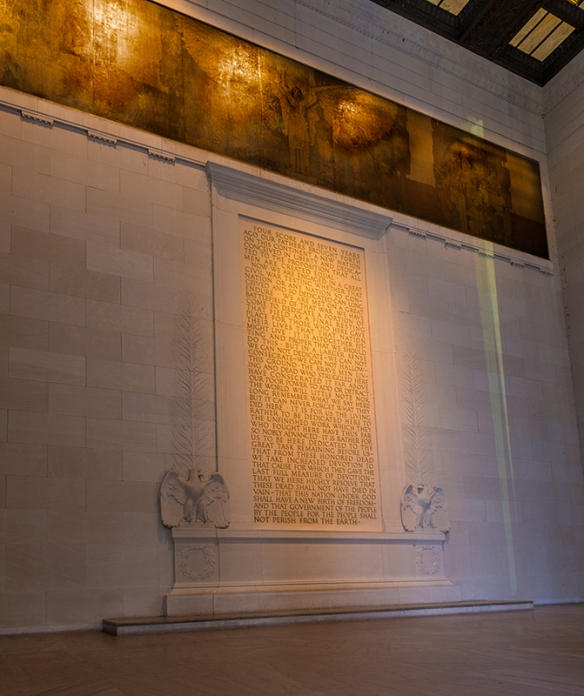 Ernest C. Bairstow, also an immigrant, carved the inscriptions containing the text of Lincoln’s Second Inaugural Address and his Gettysburg Address on the interior north and south walls.  Evelyn Beatrice Longman, the first woman sculptor to be elected a full member of the National Academy of Design in 1919, completed all of the Lincoln Memorial interior decorative carvings surrounding the Gettysburg Address and the Second Inaugural Address. Visitors today might want to spend a little time re-reading those words.