I know, I know.  I promised scenes from the Galapagos would be in my next post, but……

A week ago (March 12), there was a full moon, an event that happens every 29.5 days.  But for photographers in Washington, DC, it was a special night because the moon would rise in a location on the horizon that was pretty close to perfect for the so-called “Holy Grail” shot.  It happens, on average, every one or two years. 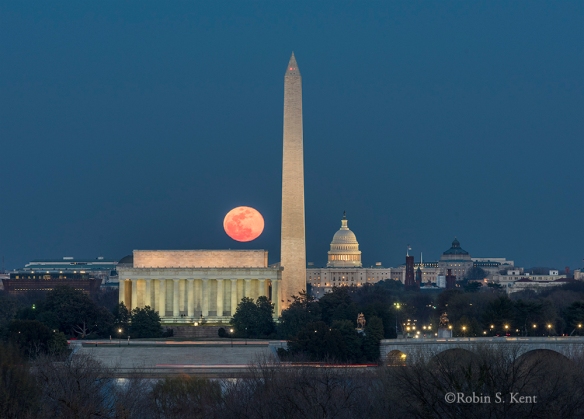 There is a spot in Arlington, Virginia where one has an excellent view of the city of Washington with a compositionally sweet alignment of the Lincoln Memorial, Washington Monument, and the U.S. Capitol.  The location is the base of the Netherlands Carillon, just to the south of the Iwo Jima Memorial.

Before the advent of the smart phone/tablet, anticipating this event was not easy, requiring a compass and access to some publicly available software on the website of the U.S. Naval Observatory.  But now, with the availability of numerous apps, such as The Photographer’s Ephemeris (TPE) or Photo Pils, anyone can figure it out. For example, on this night, even with temperatures hovering around freezing, there were over 60 photographers there, each with at least one tripod and a big lens.

Other than the cold weather, conditions looked pretty good on this evening.  The sky was clear and the moon would rise at 86.0 degrees azimuth on the horizon and 13 minutes after sunset.  That was a bit further south than ideal, and a bit later than desired relative to the sunset. Nevertheless, it would be the best opportunity in 2017 with only one other chance (October 5) that will be in the ballpark.  However, in October, the blue twilight period (Civil Twilight) will end before the moon gets sufficiently elevated.

Although the official time of the moonrise was 7:27 PM, it would be a bit later before it would appear above the skyline.  It was first sighted by the group at about  7:29 and the image immediately above was taken about 90 seconds later.  By this time, the end of civil twilight is approaching and we would soon lose the classic blue color that is essential to this kind of image.

Furthermore, the combination of a very clear sky with the rapidly fading twilight would cause the moon to become extremely bright as it rose above the dimming effects of the ground haze.  The above image was taken at 6:36 PM, about 3 minutes before the end of civil twilight.    Already the moon is becoming increasingly bright and the excellent details on its surface have almost vanished.  Any images taken after this point would require increasingly heroic post-processing efforts.

So when you prepare for a moon shot, make sure you check more than the location.  The relationship in time between the sunset and moonrise and civil twilight can have a significant impact on your results.  If you are in a classic landscape situation where no artificial lighting typical of an urban scene is expected, you may want to evaluate the prospects on the night just before the actual full moon.  This is especially true where a mountain may be blocking the moon at the time of the “official” moonrise.

Next (and I promise): Scenes from the Galapagos Islands.