Even during a short visit to Quito, the capital city of Ecuador,  there is plenty to see and photograph.  Here are a few more selections from a two-day visit. 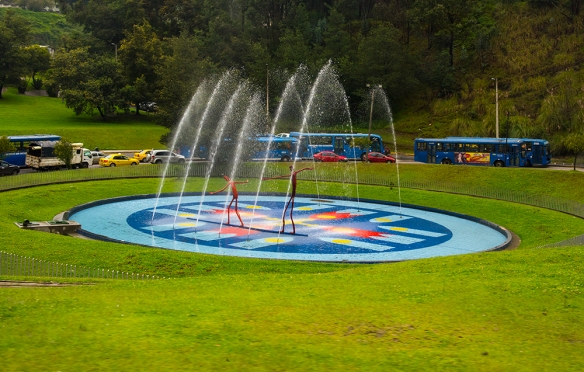 Like any major city traffic congestion can be a problem during rush hour, but as our bus slowly worked its way up this access ramp the presence of a delightful water sculpture provided some major visual interest.  Quite a difference from the storm water pits we have in Fairfax County, Virginia. 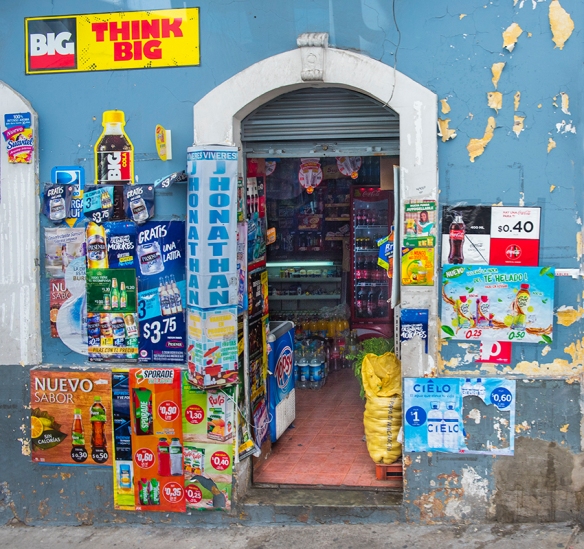 An evocation to “Think Big” by a small mercado

Small businesses were everywhere, most often falling into the categories of eateries or convenience stores. 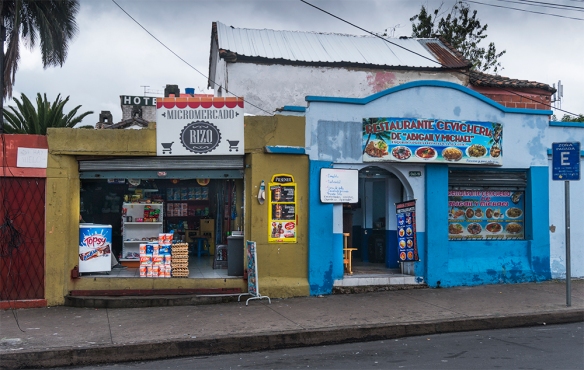 (The origins of ceviche, raw fish cured in citrus juices, dates back some 2,000 years in the Andean region, with recipes likely updated with the arrival of the Spanish.) 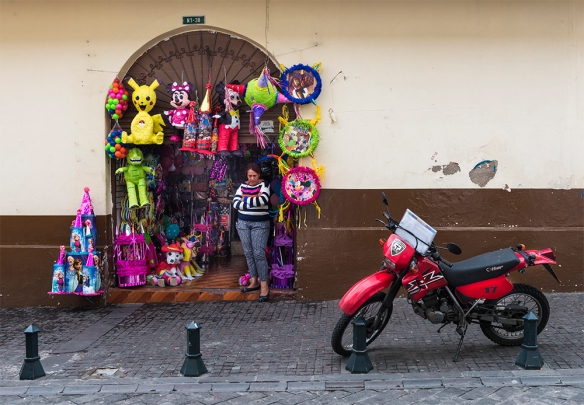 Slow Business at the Toy Store

(The flashy red cycle belongs to Tevcol, a large private security firm with operations all over Ecuador.  The rider was apparently making his rounds while I took this picture.)

Churches are also found everywhere and some of the major cathedrals boast opulent interiors lavishly decorated with gold leaf, gilded plaster, and wood carvings.  Unfortunately, photographs of the interior were not allowed in any of those we visited. 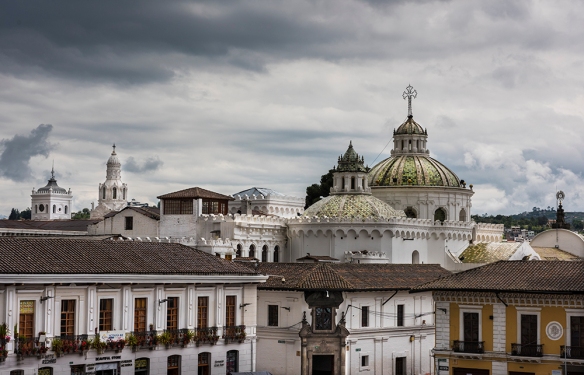 (A Jesuit Church, one of the best known in Quito, dating back to 1605)

General elections (President and National Assembly) were to be held in a few days and the campaign was reaching its climax. There were about 8 candidates running for President and if the winner did not exceed 40% with 10% or higher gap over the total of the person finishing second there would be a run-off in early April. There was also a referendum on whether office holders or public servants should be restricted from having assets held in tax havens. 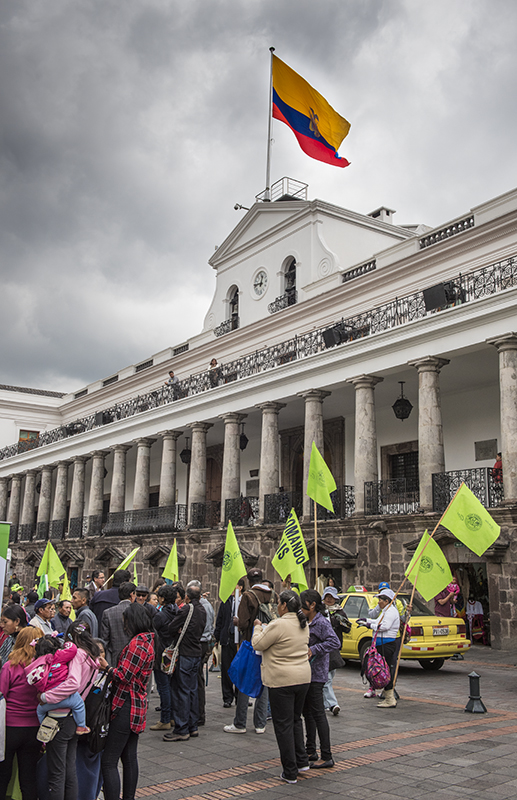 Political Rally for the Alianza Pais

All eligible voters are required to cast a ballot; Those who do not must pay a fine.  As it turned out, the leading candidate of the incumbent party (Alianza Pais) did not quite secure the necessary totals so there will be a runoff.  The Alianza also suffered a loss of seats in the National Assembly but still holds a dominant position.  The referendum passed easily. 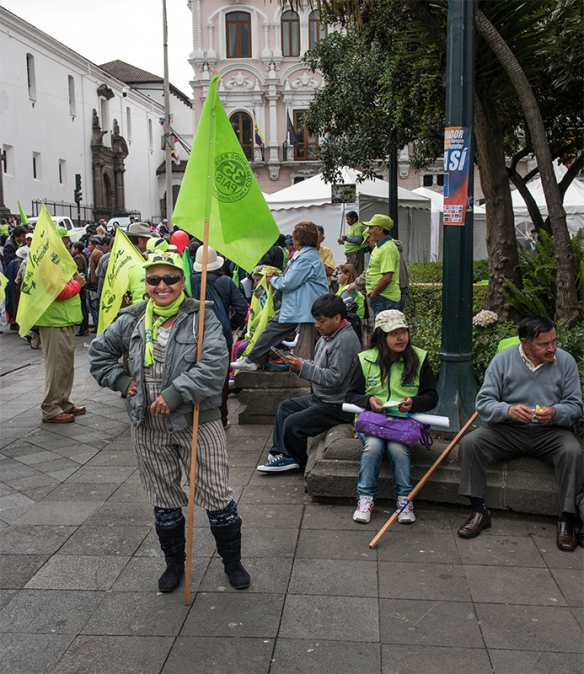 The Parque del Ejido, one of the largest parks in the city, is a popular gathering place for artisans, food vendors, street performers, and sporting activities.  The Volleyball court was surrounded by spectators but a gentle persistence allowed me to squeeze through about three rows of the SRO crowd to get a good look.  There were 3 players on a side and their net is about 2 feet higher.  So there is no spiking; instead the net player executes what is much closer to a catch and throw, a maneuver that would bring an immediate whistle everywhere else I have seen the game played. 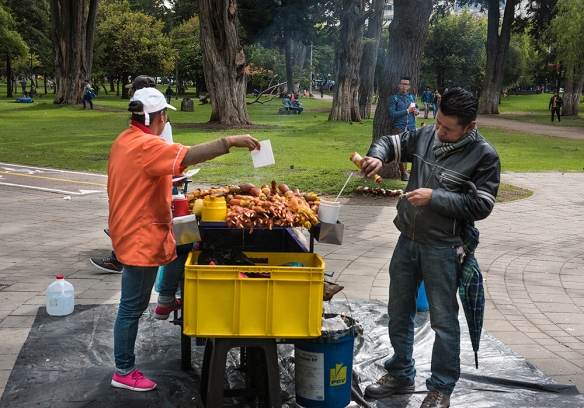 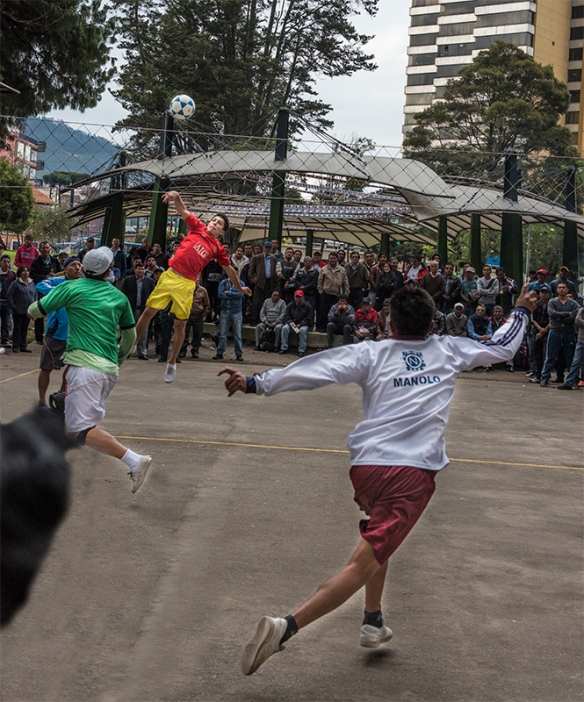 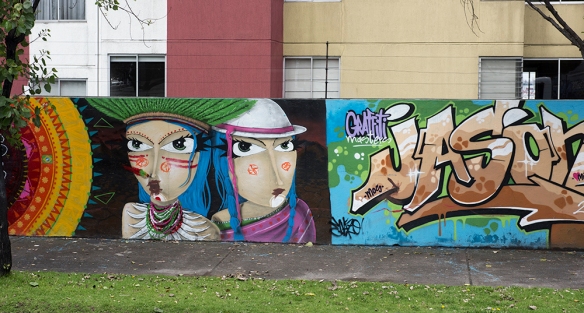 And, of course, Examples of Street Art, tagging, and Graffiti could be seen everywhere.