The Great Hall, Library of Congress

The Magna Carta, created in 1215, which became the foundation for the rule of law in England and much of the modern world, is on display at the Library of Congress in Washington, DC.  As part of its 800th anniversary celebrations.   But there isn’t much time remaining.  The 10-week exhibit closes on January 19th.

The Magna Carta on Display

The main principles guiding our democracy today, such as due process of law, the right to a jury trial, freedom from unlawful imprisonment (Habeas Corpus), and the theory of representative government can all be traced to this document, signed on Runnymede meadow alongside the Thames River on June 15, 1215.

The story of that influence, especially on the American Revolution, is described in the exhibit by more than 70 related artifacts such as the confirmation of the Magna Carta by King Edward I in 1297; George Washington’s copy of a draft of the U.S. Constitution; Jefferson’s copy of the Federalist Papers, a journal of the proceedings of the Continental Congress, and Chief Justice Earl Warren’s draft opinion of the Supreme Court’s Miranda Decision.

If you miss this exhibit, mark your calendars for President’s Day. Monday, February 16th,  one of only two days this year when the Main Reading Room of the Library of Congress will be open to the public. 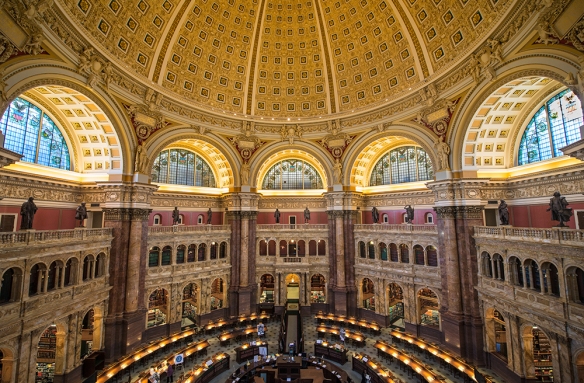