Since my last post on 26 January, I have been traveling without benefit of Internet connectivity.  Our principal destination was Antarctica but there also were brief stops in Argentina and Brazil.  But now I’m back and this is the first of several posts describing what happened.

After a harrowing pair of flights (snowstorm, flight cancellations, etc.),  we arrived more or less on time and unscathed in Buenos Aires.  The fate of our luggage was another matter, apparently missing the connection from Miami.  But I had my camera gear in my carry-on pack and the view across the street from our hotel was inviting (see image above).

Our short stay made it difficult to see many sights in the city, but a few forays were made between periodic investigations on the status of our baggage. It turned out that the immediate neighborhood featured several touchstones of the city’s former glory, troubled political history, and present economic troubles.  The park across the street is part of the Plaza San Martin named after the 19th century military leader who led the fight for Argentina’s independence from Spain. A massive equestrian statue in his honor dominates the southwest entrance plaza to the park (image above).  A less positive event is memorialized nearby.  The Monument to the Fallen in Malvinas honors the Argentines killed in the 1982 war with Great Britain over the Malvinas Islands (called the Falklands in England). 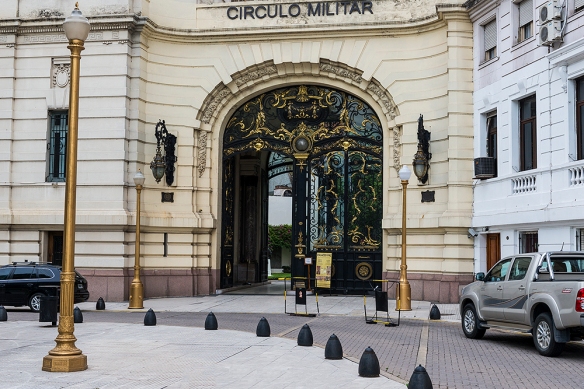 Former Mansion of the Paz Family

The former home of one of the most powerful families of 20th century Argentina is directly across the street from Plaza San Martin.  Now known as the Circulo Militar, it originally was the opulent residence of the Paz family, owners of then influential newspaper, La Prensa.  Today it is a historical museum, but tours were not available while we were in the city.

A walk down nearby Avenida Florida takes one past numerous tourist traps and the ubiquitous “Cambio” hawkers enticing passersby with offers of bodacious exchange rates, a reminder of the country’s enduring economic problems. Nostalgic reminders of the city’s glory days in the late 19th and early 20th centuries are also here such as the now empty Harrod’s Department store, the first and only foreign venture by London’s famed shopping establishment. Originally established in 1914, it was known as the gathering place for the city’s elite in the decadent tea salon and the place to buy Italian suits, expensive perfume and imported jewelry. A few hundred feet away is the intimidating entrance to the Centro Naval (image above), an ornate beaux art structure also built in 1914 as the home of the Argentine Navy’s sports and cultural club.   The majestic building and the club’s exclusivity reflect the important place the Argentine navy has historically held.  Unless you are a member, don’t bother trying to get in. 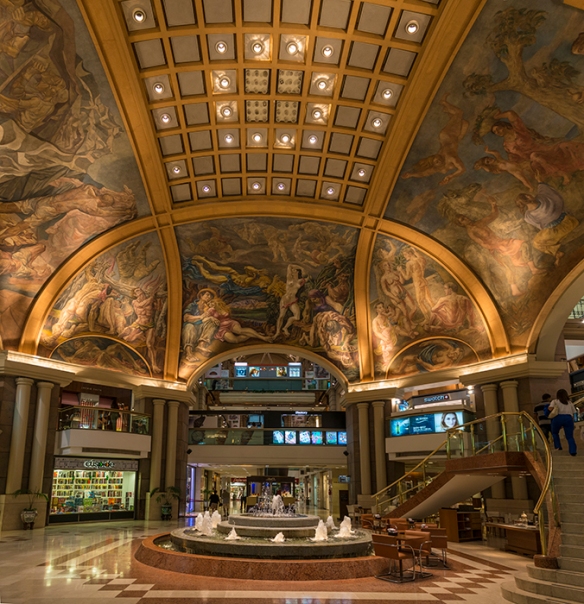 Another magnificent building is right across the street. The Galerias Pacifico was built in the 1890s as a high end department store.  Since then, it has undergone a decidedly mixed history of transformations that included tenants of the National Museum of Fine Arts, a luxury hotel, and offices of the Buenos Aires and Pacific Railway.  In 1947, five of Argentina’s top artists painted ceiling murals (see image above) which are considered national treasures.  The building also has a darker side; in the mid-1970s, its basements were used as torture chambers for political prisoners.  Today, it evokes its original purpose as an upscale shopping mall.

A 15-minute walk from the Galerias Pacifico will take you to Puerto Madero, a shipping port constructed in the 1890s that became obsolete ten years later because it was too small for newer, larger ships (see image above). For nearly a century, the area remained essentially unused until a massive revitalization effort was launched , transforming the old warehouses into elegant apartments, offices, hotels, cinemas, and restaurants (including the top rated Cabana las Lilas which we had intended to try but the airlines’ holding all our decent clothing hostage made that inadvisable). Every street in Puerto Madero is named after a woman, highlighted by the Puente de la Mujer, a pedestrian bridge by the architect Santiago Calatrava (see image below). 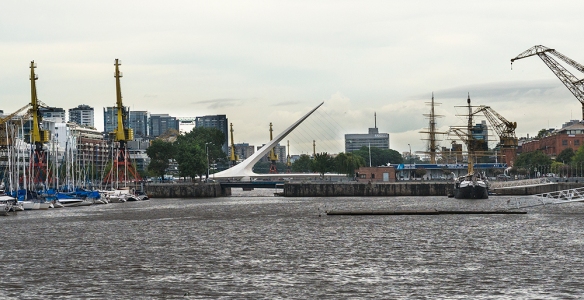 Unfortunately, our time in Buenos Aires was too short and we had a plane to catch, a 4-hour flight to Ushuaia, Argentina, the southernmost city in South America and the embarkation port for our voyage to the White Continent. Our missing luggage had arrived at our hotel just in time and we were hoping that our bad travel luck was behind us……..

25 thoughts on “Journey to the South-Part 1 (Buenos Aires)”