Spoiler Alert:  There will be no moon photograph in this post; hence you will have to skip down several paragraphs if you just want to see the pictures.

Last week, the weather forecasters and other media were touting the so-called “Super Moon” that would be rising as a full moon on Monday evening.  I am always looking  for images that have a full moon nicely aligned with one of the iconic scenes in Washington, DC but a quick check of the details on time and placement were not encouraging.   The moonrise was timed to occur about 10 minutes before the sunset, so the moon would be pretty high before the deep blue twilight colors would be at their best. The best location seemed to be at the Tidal Basin with the moon coming up adjacent to the Jefferson Memorial but the placement wasn’t ideal.  But, you never know for sure, so it’s best to show up just in case.

But clouds began to appear in the afternoon, so prospects were getting dimmer by the minute. But one of the benefits of the location is that the Franklin D. Roosevelt Memorial is right along that side of the Tidal Basin and I had been intending to check some evening to see if the fountains were running and illuminated.  This would be Plan B.

Arriving at the Tidal Basin, it was quickly obvious that the media’s flogging of the Super Moon story had the expected effect: At least 3 dozen tripods were strung along the sidewalk of the Tidal Basin, with their cameras all pointed at the Jefferson Memorial.  But for a change, there was no consensus on where the best spot would be.  I joined the group closest to the Memorial (about 6 shooters) and checked The Photographer’s Ephemeris (TPE) app which confirmed this was the best spot.

With 15 minutes to go, I strolled about 100 yards up the sidewalk where a larger group had congregated (seeking safety in numbers?).  Here TPE was saying the moon would rise way off to the left of the Memorial while the PhotoPils app indicated the moon would be much closer to the Memorial and if it was right, this was the place to be. What to do? Well, the clouds looked really bad, there was a very nice bench right next to my tripod, the other photographers were friendly, and the FDR Memorial  fountains were only a 2-minute walk away.  The bench tipped the decision.

Ten minutes after the scheduled rise, one of the other shooters pointed out a faint pink circle almost completely covered by the clouds and it was way over to the left, exactly where TPE had predicted.  But it didn’t matter because it was hardly visible and soon was completely gone from view.  While my neighbors picked up their gear and started to migrate toward the other spot, I chose Plan B and went directly to the FDR Memorial.

The image below is a quick pick from the night’s take but I was pretty happy with all of the results.  It turns out that the light is very nice during a brief period of 10-20 minutes after sunset.  After that, the lighting tends to blow out and detail in the rocks becomes difficult to pull out.  The Memorial is loaded with fountains so this implies a number of future visits will be rewarding.

When finished with the fountains, it seemed appropriate to check on the folks who had cast their fate with the moon.  It is entirely possible that there was a spectacular moment while I was away, but the scene below indicates that nothing was going on at 8:35.  It seemed best not to ask. 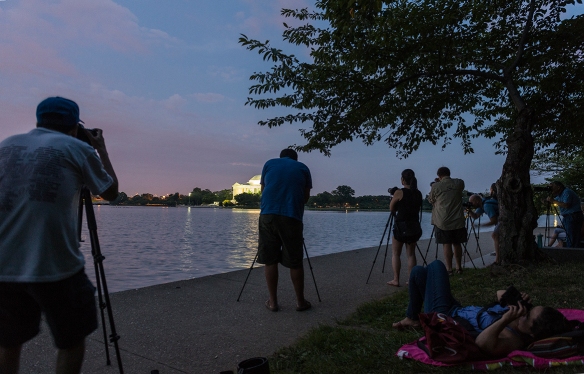 13 thoughts on “Super Moon: Always Have a Plan B”