Back in 2001, when I decided to get serious about photography, I signed up for a workshop with Galen Rowell at his studio-gallery in Emeryville, California.  Little did I know that this week-long seminar would have such a great influence on my approach to photography.  It was there that I first heard the term “Magic Hour.” Galen described it as the time when the sun is close to the edge of the earth’s horizon and the cool blues of the night mingle with the warm colors of the day.  Since then, I would estimate that 80% of my images have been taken during that time which occurs twice a day, at dawn and dusk. 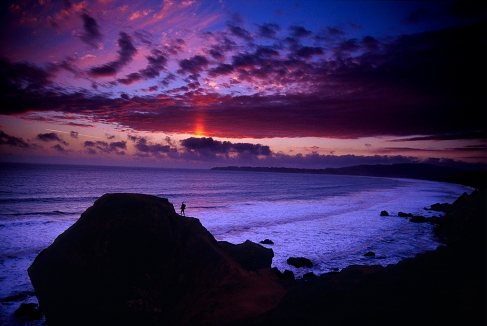 We were all shooting film back then, but Galen was well aware of the approaching tsunami of digital technology and would have been out in front of it had he and his wife Barbara had not tragically died in a plane crash in August 2002. I remember the first morning at the workshop—we were all serious amateurs but none was an accomplished professional and we were all nervous that our skills might not be worthy in the eyes of someone so outstanding in the field of landscape photography.  He quickly put us at ease, however, with an introductory slide show that began with his first image taken during a mountain climb.  While the image itself was well composed, it was otherwise unexceptional and that was his point.  Comparing that ordinary to shot to examples of his more recent work, he said the difference was gaining an understanding of the qualities of light. One can apply that understanding in any outdoor photographic situation, not just in extreme wilderness locations.  Readers unfamiliar with Galen Rowell should get their hands on his book, “Mountain Light: In Search of the Dynamic Landscape.”It’s available at the Mountain Light Gallery in Bishop California.

The image of Stinson Beach above was my first successful attempt to capture a twilight image and was taken a few days after the workshop.  At the time, I was using a Nikon F-100 SLR and shooting Ektachrome 100VS transparency film.  As we learned in class, I used a tripod for sharpness, a graduated neutral density filter to hold back the brighter sky, and took advantage of a hiker’s presence to give a sense of scale. 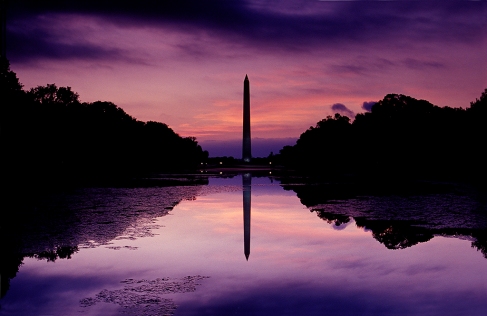 The image above was taken in September 2001, about 6 months after returning home from the Galen Rowell workshop.  It’s an example of what can happen if you ignore bad conditions and show up anyway.   The sky was completely overcast when I drove into DC but I thought I could at least scout a location for an image of the Lincoln Memorial that I had in mind.  But as I walked up to the Reflecting Pool, there was a slight break in the clouds in the east.  I quickly abandoned my original plan and set up my tripod and camera just as the magic began to happen.  It lasted maybe five minutes.  Since that morning, I’ve been to this same spot many times at sunrise but have never seen colors like these again.

The primary challenge in shooting during twilight is being in the right place to be because the moment passes quickly.  Sometimes it’s luck; sometimes it’s planning.  I’ll return to this subject in future posts.