Last week we witnessed a rare event in Washington, DC.  Successive waves of World War II aircraft flew down the Potomac River to Memorial Bridge where they made a left turn and flew over the National Mall.  I thought it would be a perfect subject for Week 49 of Stacy Fischer’s AfterBefore Friday Forum, where participants can exchange views about different post-processing techniques. My Before Image is shown below.

A total of about 50 planes were involved.  In the weeks leading up to this day, every local photographer with a telephoto lens was plotting where to be for the perfect shot. My choice (above) was Theodore Roosevelt Island, located about one mile before Memorial Bridge and the left turn the planes would be making. It had a perfect view of the Key Bridge and Georgetown and I was sure that they would be flying right over the bridge (so said the published schedule) before starting the left turn.

It was a great location, shaded from the bright sun, a comfortable spot to sit while waiting, and only one other person found his way there.  Many other strategies were apparent:

Stand Up Paddlers move into position

Kayakers ready for the action

The first wave—4 small trainer aircraft– arrived on schedule, but far too high to be included in the frame with the bridge.   A trio of  bombers approached in a nice tight formation.  Unfortunately, they were way off to the left.  The image below is heavily cropped with 85% of the frame (all sky) excluded.

There was enough time between each wave to change lenses or make other adjustments.  Eventually, I switched to my 70-200mm lens with a 1.7x tele-extender.  This is a much bulkier combination than the little 28-300 so I ramped up the shutter speed as an even larger plane came in, again too high and just to the left of the bridge.

Shortly afterward, another group swooped in and the 340mm lens was able to get only three of them.

Again, too high and too far left.  But don’t get me wrong.  It was very cool to see all these planes roaring overhead.

It was clear by now that there would be no enormous print of a WW II plane buzzing the Key Bridge hanging on my studio wall.  But all was not lost—ABriday Forum was coming up and the theme is “No Rules Post-processing. “ So perhaps if I didn’t like what I saw, perhaps I could create something I did like.

So, using the original image of the three planes above, I “cloned” them into the Before Image of Key Bridge, taken a few minutes before the Flyover started.  The result is the “After Image” for this week’s AfterBefore Friday Forum.

Eagle-eyed viewers might notice the trio is arranged differently and also that the propellers are blurred a bit.  An aviation expert told me slow shutter speeds are needed to get a more realistic effect with the propellers.  Problem is, naturally, that the entire plane would be blurred becaue both the camera and the planes were moving.  So a touch of the Radial Blur filter in Photoshop provided the effect.

It would, of course, be unethical to pass this off as a real photograph of what happened. But it didn’t turn out terribly bad.  I had better luck with the first four planes in the Flyover, the only ones that actually did fly over the bridge.  They were too high to be seen as shown below, but the angle of view is less weird. 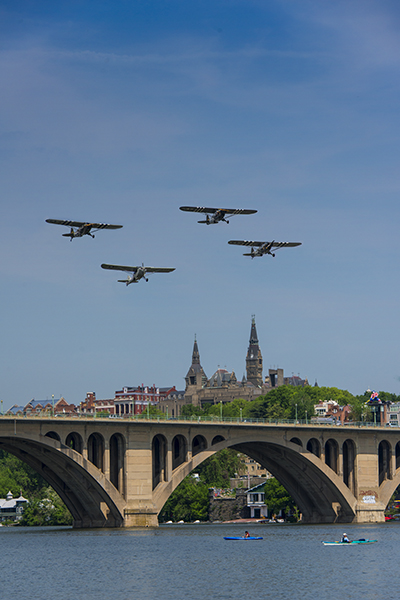 The Clone Tool in Action

Please check out Stacy Fischer’s Visual Venturing Blog and see the contributions by the other participants.  They can be found by clicking here.